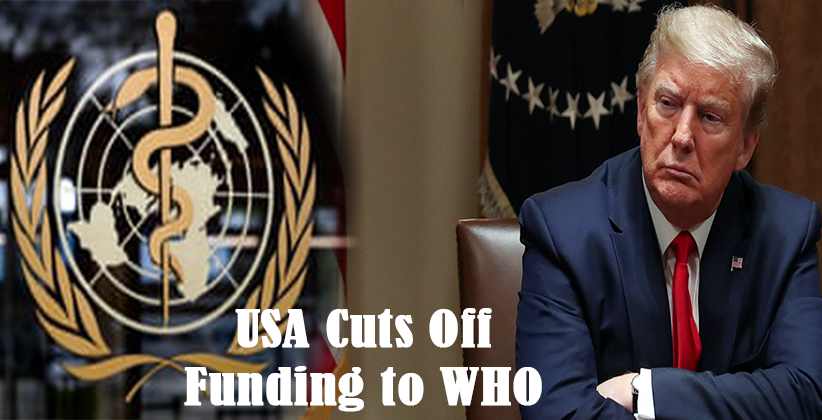 The coronavirus pandemic has struck every region in the world, resulting in heavy casualties. Initially destroying populations in China, Iran, and then entire Europe, now the United States of America has become the new hotspot of this pandemic. With more than 1.7 million cases, this is the highest number of cases seen by any country till now. The pandemic has taken more than 100,000 American lives in a matter of months.

The Trump administration announced that the USA would go on to cut off all ties with the World Health Organization (WHO). He said that Chinese officials ignored their obligations of reporting the nature of the virus and forced the organization to mislead the world when the virus was first discovered. He also blamed the organization for the loss of lives to the pandemic and the economic hardships yet to come.

He alleged that the Chinese government had complete control over the World Health Organization irrespective of the fact that it pays $40 million per year to it as opposed to $450 by the USA. He blamed the organization for the failure to provide the requested and much-needed reforms resulting in this severance of funding. The funding will now be provided to other global public health organizations.

The American President, Donald J Trump, blamed China for spreading the virus and deaths throughout the world. He alleged that China stole intellectual property, billions of dollars, and jobs from America and is also violating its commitment under the World Trade Organization. China, he alleged, has unlawfully claimed territories in the Indo-Pacific Ocean, threatening freedom of navigation and international trade and broke its word to the world on ensuring the autonomy of Hong Kong.

"We must have transparency. Why is it that China shut off infected people from Wuhan to all other parts of China? It went nowhere else; it didn't go to Beijing, it went nowhere else, but they allowed them to freely travel throughout the world, including Europe and the United States. The death and destruction caused by this are incalculable," he said.

Moreover, he talked about how the USA wants to maintain a constructive relationship with China but, at the same time, has to defend its national interests. A new proclamation was also announced, which would protect vital research in American Universities and ban Chinese nationals from attending who would be ‘potential security risks.’

America’s other latest agenda has become protecting markets and investors from Chinese companies. Trump asserted that their practices were not reliable and announced that his presidential working group on financial markets would study Chinese companies to protect American interests.

Lastly, the US administration also announced that they would also retract the Special status given to Hong Kong. They announced that China has moved from the policy of ‘One country Two systems’ to ‘One country One system’. With another 27 years remaining for Hong Kong to remain a Specially Administered Region under the British Handover, this announcement comes in the context of a massive shift in Chinese policies. The Chinese securities law saw an enormous change in the field of Initial Public Offerings, and the government has also decided to implement this law in the Hong Kong stock exchange, much to the frustration of the Western World.

These restrictions on China from the USA come as a result of the ongoing trade war between both nations regarding tariff prices, which was only amplified by the COVID-19 pandemic.