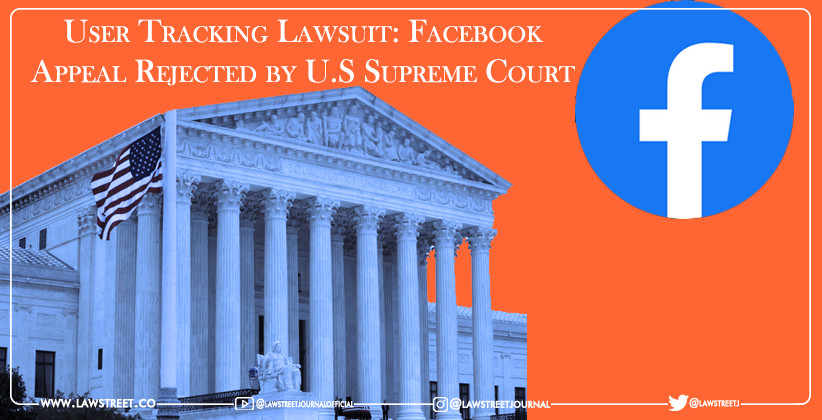 The U.S Supreme Court on Monday (March 22, 2021) rejected Facebook’s bid to trim a $15 billion class action lawsuit that accused the company for illegally tracking the activities of its users even after they’ve logged out of the same.

The court rejected to hear Facebook’s appeal from a lower court ruling that strived to resuscitate the nationwide litigation that was proposed. It accused the company of violating a federal law of theirs, called the Wiretap Act. It does so by tracking the visits of the users secretly, to websites that have some Facebook features, such as the “like” button.

Additionally, it was accused of violating the privacy rights of its users under the law of California. However, its appeal in the Supreme Court was only pertaining to the Wiretap Act.

The proposed nationwide class action lawsuit was filed by four individuals in the Federal Court of California while seeking $15 billion in damages for Menlo Park, Facebook’s actions between April 2010 and September 2011. The court papers stated that the company stopped its non-consensual tracking after being exposed by a Researcher in 2011.

To defend, Facebook said it makes a lot of efforts to protect the privacy of its users and hence, must not face liability over the commonplace computer-to-computer communications.

Today, there are more than 2.4 billion users of Facebook worldwide. It includes more than 200 million in the US.

The case finds its eccentricity on the fact that Facebook uses “plug-ins” which are often incorporated by third party websites to track the browsing histories of the users. Along with this, it has also been accused of selling “cookies” that are digital files helping to identify internet users, to advertisers for profit.

The contention of Facebook pertaining to this was that it tracks the information to custom the content and ads shown to its users.

The said case was dismissed in 2017 by a Federal Judge. It has been revived in 2020 by San Francisco based 9th U.S Circuit Court of Appeals, thereby allowing the privacy and Wiretap Act claims to go ahead.

9th Circuit said the following in its ruling:

"Facebook's user profiles would allegedly reveal an individual's likes, dislikes, interests and habits over a significant amount of time, without affording users a meaningful opportunity to control or prevent the unauthorized exploration of their private lives," the 9th Circuit said in its ruling.

The Wiretap Act deals with prohibiting eavesdropping on electronic communications. However, it exempts parties to the communication which are the designated sender or receiver of the information.

To defend itself, Facebook submitted by saying that it is not liable under the Wiretap Act owing to the fact that it is a party to the impugned communication by the virtue of its plug-ins.

Lastly, the company said, "Facebook was not an uninvited interloper to a communication between two separate parties; it was a direct participant.”