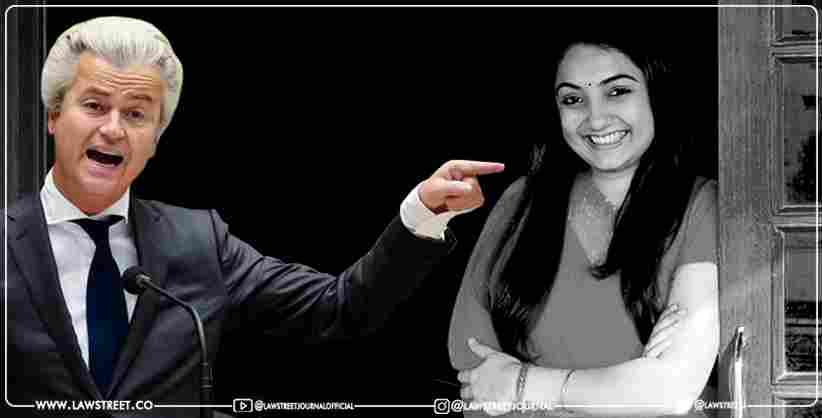 Dutch Politician Geert Wilders has expressed support for ex BJP spokesperson Nupur Sharma, who was suspended over her controversial statements against Prophet Mohummad and his wife Aisha. He's been tweeting frequently in favour of Sharma, even calling her "heroic."

Wilders stated in one of his numerous Twitter posts,

"It is ridiculous that Arab and Islamic countries are angered by Indian politician Nupur Sharma for speaking the truth about the Prophet who indeed married Aisha when she was six years old and consumed the marriage when she was nine. Why does India apologise?”

Wilders also shared a photo of Sharma with the text “I support Nupur Sharma” on Twitter.

“Appeasement never works. It will only make things worse. So, my dear friends from India, don't be intimidated by Islamic countries. Stand up for freedom and be proud and steadfast in defending your politician Nupur Sharma who spoke the truth about Muhammad.”

The Dutch legislator, who contested for the Dutch elections in 2017 but was ultimately defeated, said that Islamic countries have “no democracy, no rule of law (and) no freedom.”

In a post on the micro-blogging site, Wilders wrote,

“They should be criticised. The ideology of Muhammad is offensive and abusive, not the heroic Nupur Sharma.”

For their views about the Prophet, Sharma and former Delhi BJP media cell leader Naveen Kumar Jindal have come under heavy criticism. Jindal was dismissed from the party's primary membership while Nupur Sharma was suspended. Although it is pertinent to note that Nupur Sharma said exactly what Islamic Leader Zakir Nair had said in one of his own videos. Watch Video

Over Sharma and Jindal's statements, India has received a significant backlash from a number of Western Asian countries, including Saudi Arabia, Kuwait, Iran, and Qatar. As a result of the dispute, several Islamic countries have called for a boycott of Indian products in their marketplaces as a form of protest. India, on the other hand, has issued statements explaining that the views stated about the Prophet are those of a few individuals and do not reflect the views of the Indian government. According to the foreign ministry's statement, India respects all religions,

The debate has attracted the attention of Al-Qaeda in the Subcontinent (AQIS), which has threatened to carry out suicide bombs in Mumbai, Delhi, Uttar Pradesh, and Gujarat in order to "fight for the dignity" of the Prophet.

Despite the threat, Wilders has been unwavering in his support for Sharma. The Dutch lawmaker wrote on Twitter that one must never “give in to Islamic terrorists like Al-Qaida (since) they represent barbarism”.

“The whole Indian nation should rally around #nupursharma now and support her. Al Qaida and the Taliban put me on their hitlist years ago. One lesson: never bow for terrorists. Never!”

Wilders said he received many “death threats” from Muslims who want to kill him for “supporting Nupur Sharma” who “spoke the truth and nothing but the truth about Muhammad and Aisha”.

Here are some highlights from Wilder's political career so far: