Home Judiciary Unless And Until Strong Evidence Is Produced, Presumption u/s 139 NI Act Can Not Be Rebutted: Supreme Court
Judiciary 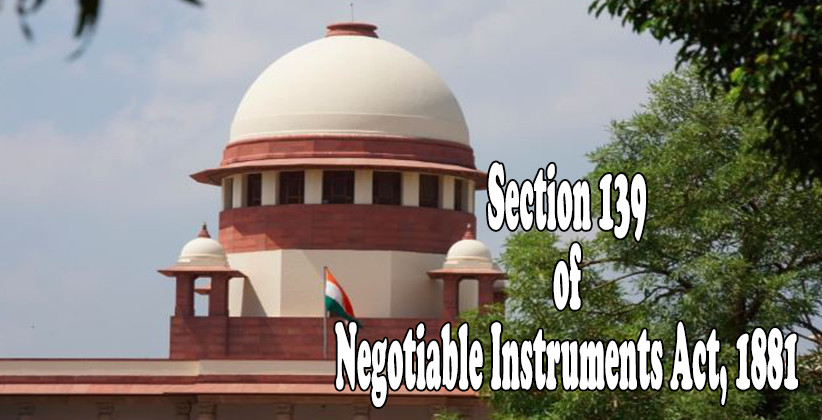 While delivering one peculiar judgement on February 19, 2020, the honourable Supreme Court observed that the rebuttal of presumption available under Section 139 of Negotiable Instruments Act, 1881can only be done after producing strong evidence.

This came into light in the case of Shiv Kumar Alias Jawahar Saraf v. Ramavtar Agarwal.

After hearing the arguments in full length by the counsels of the both sides, the bench comprising of Justice K.M. Joseph and Justice Ashok Bhushan resonated with the view of the High Court that the rebuttal of presumptions cannot be taken at the stage of the court taking cognizance of the offence.

During the proceedings, the counsel of the accused, contested that the evidences didn’t provide enough audacity to legally enforce the debt and hence there was no case of taking the responsibility of the offence or noting the complaint. Although, the HC refused to deny the complaint, and observed that the court would have to look into the prima facie of the case made and see if the provisions are reached as laid down under Section 138 of the NI Act.

The court remarked: “The presumption available under Section 139 of NI Act has to be rebutted and that rebuttal can only be done after adducing evidence. This, by itself clearly reflects that the rebuttal presumption cannot be looked into at the stage of the Court taking cognizance of the offence and registering the case all that Court would have to see is whether there is a prima facie case made out meeting the conditions precedent as envisaged under Section 138 of NI Act, which in the instant case, in the opinion of this Court, the Respondent has in fact been able to establish and fulfill all such ingredients”

“As has been stated in the preceding paragraphs since there is a presumption to be drawn of there being debt or liability in part or in the whole of the drawer to the holder of the instrument, the Court below cannot be said to have faulted upon in taking cognizance and in registering the offence. Since it is a rebuttal presumption and all the contentions and averments made by the counsel for the Petitioner being his defence, it would be open for him to raise all these grounds at the stage of leading evidence including the defence of the existence of the legally enforceable debt or liability. However, there can be no doubt that at the time of filing of complaint there was always initial presumption which would be in favour of the complainant.”

On the basis of the above observation, the Court dismissed the appeal and observed:

“We are in full agreement with the opinion of the High Court expressed in the above-noted paragraphs which has been referred by learned counsel for the appellant. It is well settled that the rebuttal can be made with reference to the evidence of the prosecution as well as of defence.”

The order was delivered by the bench comprising of Justice Ashok Bhushan and Justice K.M. Joseph on 19th February 2020.

For a Case to Fall Under SC/ST Act, Offence Must be In Public: States Allahabad High Court