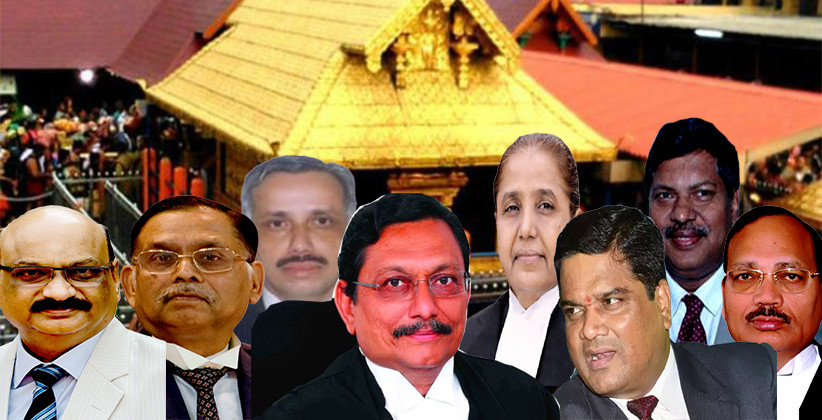 The 9-Judge Constitutional Bench of the Supreme Court that will hear the reference made in the Sabarimala Review Petition has been notified. The case is posted for a hearing on January 13, 2020.

Alongside the Chief Justice of India, SA Bobde, the nine-Judge Bench will comprise of Justices R Banumathi, Ashok Bhushan, L Nageswara Rao, Mohan M Shantanagoudar, S Abdul Nazeer, R Subhash Reddy, BR Gavai and Surya Kant. The new coram of judges will not consist of anyone from the previous set of justices.

In the Sabarimala case, Article 14(pertaining to women’s rights) had prevailed over Article 25 and Article 26 of the Constitution of India and it was thereafter referred to a larger bench for review.

Justices Rohinton Nariman and DY Chandrachud, who dissented from the majority opinion earlier, have been excluded from the new bench. Additionally, Justice Indu Malhotra who was the sole dissenter in the 2018 judgment opining against allowing the entry of women in the Sabarimala temple, is not a part of the new bench either.

On September 28, 2018, a bench had mentioned that custom pertaining to the Sabarimala Temple was not just regressive but also unconstitutional and that doors to women should be opened to the temple. Quite a few review petitions were filed against the judgement.

The apex court reiterated the fact that such limitations were concerned with the entry of Muslim women into mosques and dargahs and the Parsi women into their holy place, which is the fire temple. It said that it was time for the apex court to evolve a judicial policy to do “substantial and complete justice”.