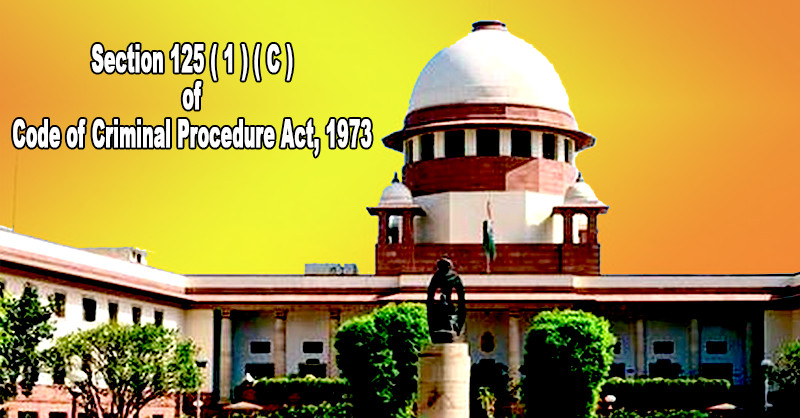 A Supreme Court Bench headed by Hon’ble Justice Ashok Bhushan has passed an order holding that a major daughter who is unmarried is no longer entitled to claims of maintenance from her father under Section 125 of CrPC. This is applicable to those major daughters who have not been suffering from any physical or mental injury.

Section 125(1)(c) of CrPC reads, “If any person having sufficient means neglects or refuses to maintain his legitimate or illegitimate child (not being a married daughter) who has attained majority, where such child is, by reason of any physical or mental abnormality or injury unable to maintain itself, a Magistrate of the first class may, upon proof of such neglect or refusal, order such person to make a monthly allowance for the maintenance of his wife or such child, father or mother, at such monthly rate not exceeding five hundred rupees in the whole, as such Magistrate thinks fit, and to pay the same to such person as the Magistrate may from time to time direct: Provided that the Magistrate may order the father of a minor female child referred to in clause.”

The bench has not taken away the maintenance rights of unmarried and minor daughters. In the order, the Bench held that an unmarried Hindu daughter can claim maintenance under Section 20(3) of the Hindu Adoptions & Maintenance Act, 1956 until the daughter gets married

Section 20 (3) of the Act reads, “The obligation of a person to maintain his or her aged or infirm parent or a daughter who is unmarried extends in so far as the parent or the unmarried daughter, as the case may be, is unable to maintain himself or herself out of his or her own earnings or other property.”

"The obligation, which is cast on the father to maintain his unmarried daughter, can be enforced by her against her father, if she is unable to maintain herself, by enforcing her right under Section 20," it said.

In the current case, the appellant contended that a person is obligated to maintain his unmarried daughter until marriage according to Hindu Adoptions & Maintenance Act, 1956. As a minor, the appellant had filed an application under Section 125 of CrPC. The matter was deposed by the Magistrate, thereby limiting the claim application. The order was upheld by the High Court also.

By citing the decision of Jagdish Jugtawat v Manju Lata, the appellant relied on Section 20 of the Act of 1956 by stating that until her marriage, she is entitled to claim maintenance.

However, the bench dismissed the appeal. Liberty was given to the appellant to take recourse to Section 20 (3) of the Act. If so advised, for claiming any maintenance against her father.

NLSIU And VC File Counter Affidavit In Plea Against NLAT 2020, State “Implementation Of NLAT Was Only Way To Avoid Zero Year” [READ AFFIDAVIT]