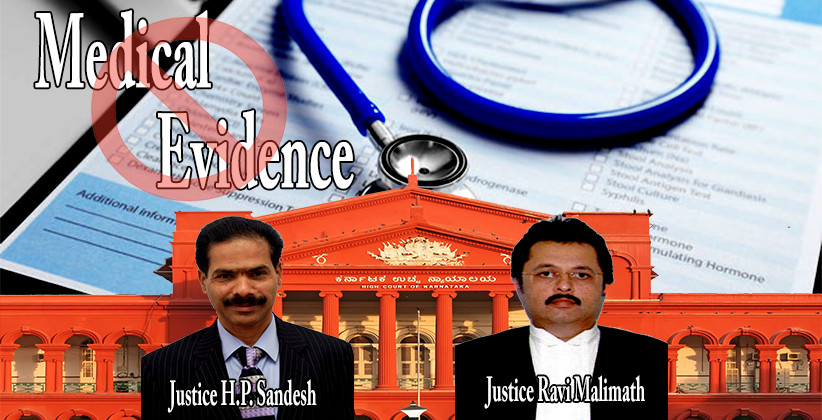 The Karnataka High Court on September 27, 2019, in the case of State of Karnataka v. S. Raju, has held that even in the absence of medical evidence the court can convict a rape accused if the very evidence of the victim inspires confidence of the court that the accused subjected her to sexual act.

A Division Bench comprising of Justice Ravi Malimath and Justice H.P. Sandesh passed the ruling on an appeal filed by the state challenging the judgment of acquittal passed by the Trial Court for the offence punishable under Section 376 of Indian Penal Code, 1860.

It was the case of the prosecution that the accused had on April 4, 2012, raped the victim who was 16-years-old at the time of the incident and threatened her of dire consequences if she narrated the same to anyone. When the incident was disclosed to the victim’s mother, she went to the police station and lodged the complaint. The police registered the case against the accused and after investigation filed the charge sheet for the offence punishable under Section 376 of Indian Penal Code, 1860.

In the case, the doctor who examined the victim, submitted a report saying that he examined the victim and collected vaginal swab and smear in a sealed bottle. The Investigating Officer furnished the same to RFSL. He examined RFSL report and gave the opinion that there are no signs of forcible intercourse. The doctor was not cross examined at the stage of trial.

The bench after going through the evidence of the victim and other witnesses, said that "It is important to note that, first of all, there is no any enmity between the family of the complainant and also the accused and if there is no such enmity between the two families, there was no need to implicate a person that too in a heinous crime of rape. It is also important to note that no parent would take a decision to falsely implicate a person in a serious offence of rape of her own daughter, which would be a stigma to the family of the victim."

Having considered the evidence available on record, the court said that “the very evidence of P.W.2-victim inspires confidence of the Court that accused subjected P.W.2 for sexual act and even in the absence of medical evidence this Court can come to the conclusion that P.W.2 was subjected to sexual assault and as held by the Apex Court in the judgments referred to supra, there need not be medical corroboration in the cases of sexual assault. If the evidence of the victim inspires confidence of the Court this Court can come to the conclusion that P.W.2 was subjected to sexual act by the accused. The Court below has committed an error in considering the suggestions made by the accused counsel through P.W.1 and P.W.4 and has come to a wrong conclusion that there was enmity between the family of the complainant and the accused, which is opposed to the evidence on record. The other reasonings given by the trial Court shows that the Court below has magnified the minor discrepancies found in the evidence of P.Ws.1, 3, 4 and 11 regarding victim meeting those persons after the incident. Hence, the very approach of the trial Court is erroneous and it requires interference by this Court. It is a fit case to reverse the finding of the trial Court.”

In view of the observations made, the court allowed the appeal and set aside the order of acquittal.

The accused was convicted for the offence punishable under Section 376 of Indian Penal Code, 1860, and sentenced to undergo 7 years rigorous imprisonment and to pay a fine of Rs. 2,00,000 to the victim.