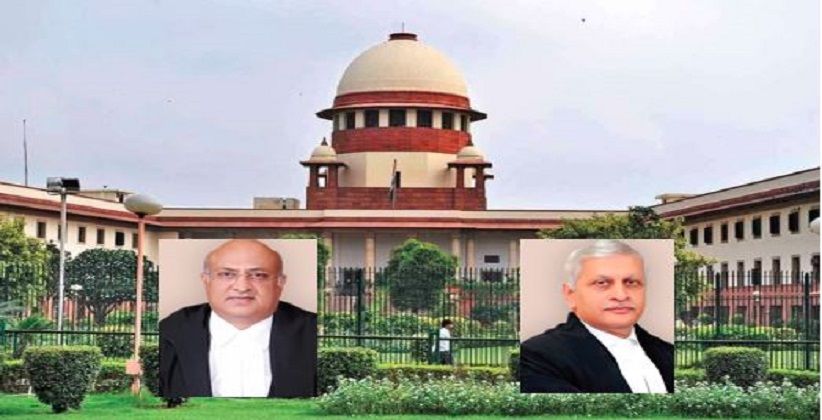 The Supreme Court in a recent case of Achpal v. State of Rajasthan has held that the provisions of the Code of Criminal Procedure, 1973, does not empower anyone to extend the period within which the investigation must be completed nor does it admit of any such eventuality.

A Bench comprising of Justices A.M. Sapre and U.U. Lalit has also held that the accused is entitled to default bail under Section 167(2) of Code of Criminal Procedure, 1973, even if the charge sheet filed by police was returned by the Magistrate for technical reasons.

The matter came before the Bench for examining the correctness of judgment and order dated 23.07.2018 passed by the High Court of Judicature for Rajasthan Bench at Jaipur in SBCRMB No. 9035 of 2018.

Later, Complainant filed a petition before High Court for fair and impartial investigation in the matter, in which an order came to be passed by the High Court on 03.07.2018. Said order recorded the submission of the Public Prosecutor as under:

“The learned Public Prosecutor for the State, to allay the apprehension of the petitioner, at the outset, has submitted that not only fair investigation shall be conducted by a gazetted police officer, not below the rank of Additional Superintendent of Police but the report of the investigation along with the opinion of the Investigating Officer shall be submitted in the concerned Court within a period of two months from the date of receipt of certified copy of this order by the Investigating Officer.” The petition was disposed of in terms of the submissions so recorded.

Since the appellants had been in custody from 08.04.2018, the investigation, in terms of Section 167 of the Code of Criminal Procedure, 1973, had to be completed by 07.07.2018. On 05.07.2018 a report under Section 173 of the Code was filed by the police before the concerned Judicial Magistrate. Since the said report was filed by a police officer lower in rank than an ASP and was thus contrary to the order passed by the High Court an application was filed by the complainant placing a certified copy of the aforesaid order dated 03.07.2018. The Magistrate having noted the contents of the said order, returned the charge sheet with a certified copy of the order dated 03.07.2018 to the police for due compliance. Thus as on the expiry of 90th day i.e. on 07.07.2018, no report under Section 173 of the Code was on record with the Magistrate.

Immediately after the expiry of 90 days, the appellants filed an application for bail under the provisions of Section 167(2) of the Code. The Judicial Magistrate by his order dated 09.07.2018 rejected the prayer for benefit under Section 167(2) of the Code. It was observed that since the charge-sheet filed on 05.07.2018 was not in compliance of the order passed by the High Court, the charge-sheet was returned due to technical fault. It was further observed that the effect of the order dated 03.07.2018 passed by the High Court was an extension of the period within which the investigation could be completed.

Issues before the Supreme Court

Here investigation was completed and Challan under Section 173 was filed on 05.07.2018. However, just two days before that, an order had been passed by the High Court recording submission of the public prosecutor that investigation in the matter would be conducted by a Gazetted Police Officer. The investigation which led to the filing of the report on 05.07.2018, was not in conformity with the statement made before the High Court. It was for this reason that the papers were returned by the Magistrate. All this happened before the expiry of the 90th day. Can it be said that the investigation was complete for the purposes of Section 167(2) of the Code so as to deny the benefit to the accused in terms of said provision. Additionally, another issue which arises for consideration is whether the order passed by the High Court could be construed as one under which the period for completing the investigation was extended.

The Bench accepting the arguments of Advocate Siddhartha Dave learned Advocate for the appellants has said that “the fact of the matter is that as on completion of 90 days of prescribed period under Section 167 of the Code there were no papers of investigation before the concerned Magistrate. The accused were thus denied of protection established by law. The issue of their custody had to be considered on merits by the concerned Magistrate and they could not be simply remanded to custody dehors such consideration. In our considered view the submission advanced by Mr. Dave learned Advocate, therefore, has to be accepted.”

Ratio Decidendi in the case

The Bench held that the provisions of the Code do not empower anyone to extend the period within which the investigation must be completed nor does it admit of any such eventuality.

Further, the Bench also held that there would be no prohibition for arrest or re-arrest of the appellants on cogent grounds and in such eventuality, the appellants would be entitled to petition for grant of regular bail.