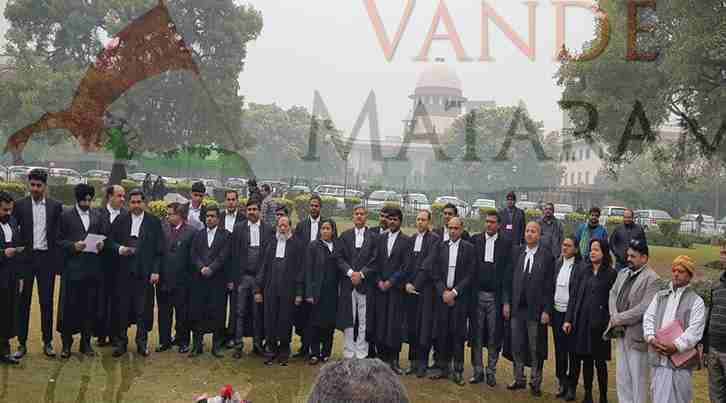 A consortium of advocates gathered at the Supreme Court lawns on January 8, 2020, to sing India's national song, “Vande Mataram” written by the noted poet Bankim Chandra Chatterjee in 1870s personifying the nation as a mother goddess to inspire a sense of nationalism amongst the freedom fighters as a mark of their support for the Citizenship (Amendment) Act, 2019.

This union of lawyers sung the national song as a symbol of support to the Citizenship Amendment Act (CAA). They also recited the Preamble of the Constitution in Hindi just after the song implying their support while chanting “We Support CAA”.

This display of support for the much-debated Citizenship Amendment Act (CAA) that has caused a national stir has come in a day after a gathering of forty lawyers carried out a similar protest in the Supreme Court Lawns where the Preamble was read aloud in solidarity with protesting against the CAA. It was meant to uphold the constitutional values and ethos.

Recently, a gathering of Madras High Court lawyers also read out the Preamble of the Constitution as part of a protest against the Citizenship Amendment Act. A number of petitions challenging various aspects of the controversial legislation are pending before the Supreme Court. The Bench led by Chief Justice of India SA Bobde is due to take up the matter later this month.