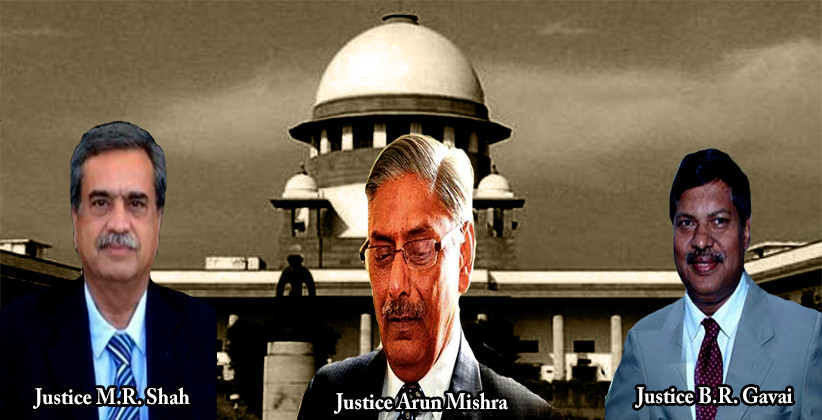 The Supreme Court on September 26, 2019, in the case of Smt. Narayanamma & Anr. v. Sri Govindappa & Ors., has observed that an agreement contrary to law cannot be enforced by the court in favour of plaintiff in a suit for specific performance, even if the defendant, who was also party to such illegality stands benefitted by it.

A Bench comprising of Justice Arun Mishra, Justice M.R. Shah and Justice B.R. Gavai was hearing appeals wherein the question for considered was in whose favour the balance of justice would tilt in a situation both the parties are common participator in the illegality?

The issue in the suit for specific performance was whether the agreement to sell dated 15.05.1990 executed by Bale Venkataramanappa in favour of the plaintiff would be enforceable in law or not. It was found that the agreement to sell dated 15.05.1990, was clearly hit by Section 61 of the Karnataka Land Reforms Act, 1961. On this ground, the suit was dismissed by the Trial Court and thereafter the Karnataka High Court.

In appeal, the Supreme Court referred to its decision in Immani Appa Rao and Ors. v. Gollapalli Ramalingamurthi (1962) 3 SCR 739, and observed: “As held in Immani Appa Rao (supra), if the decree is granted in favour of the plaintiff on the basis of an illegal agreement which is hit by a statute, it will be rendering an active assistance of the court in enforcing an agreement which is contrary to law. As against this, if the balance is tilted towards the defendants, no doubt that they would stand benefited even in spite of their predecessor-intitle committing an illegality. However, what the court would be doing is only rendering an assistance which is purely of a passive character. As held by Gajendragadkar, J. in Immani Appa Rao (supra), the first course would be clearly and patently inconsistent with the public interest whereas, the latter course is lesser injurious to public interest than the former.”

The Bench referred to judgments dealing with the question of application of the maxims ex turpi causa non oritur actio and ex dolo malo non oritur action and noted the following points:-

“This Court held that, which principle is to be applied in the facts of the case would depend upon the question, as to which principle is more consistent with public interest. The Court finds that, when both the parties before the Court are confederates in the fraud, the Court will have to find out which approach would be less injurious to public interest. The Court observed that, whichever approach is adopted, one party would succeed and the other would fail and, therefore, it is necessary to enquire as to which party's success would be less injurious to public interest. The Court in the facts of the said case finds that if the decree was to be passed in favour of respondent No. 1 (who was the plaintiff), it would be actively assisting respondent No. 1 to give effect to the fraud to which he was a party and it has been held that in that sense the Court would be allowed to be used as an instrument of fraud and that is clearly and patently inconsistent with public interest.

It has further been held, that if both the parties are equally guilty and the fraud intended by them had been carried out, the position would be that, the party raising the defence is not asking the Court's assistance in any active manner. It has been held, that all the defence suggested is that a confederate in fraud shall not be permitted to obtain a decree from the Court because the documents of title, on which the claim is based really conveys no title at all. In the facts of the said case, it was held, that though the result thereof would be assisting the defence therein to retain their possession, for such an assistance would be purely of passive character and all that the Court would do in effect is that on the facts proved, it proposes to allow possession to rest where it lies. It has been held that, latter course appears to be less injurious to public interest than the former one.

It could thus be seen that, although illegality is not pleaded by the defendant nor is relied upon by him by way of defence, yet the court itself, upon the illegality appearing upon the evidence, will take notice of it, and will dismiss the action ex turpi causa non oritur actio. It has been held, that no polluted hand shall touch the pure fountain of justice. It has further been held, that where parties are concerned in illegal agreements or other transactions, courts of equity following the rule of law as to participators in common crime will not interpose to grant any relief, acting upon the maxim in pari delicto potior est conditio defendetis et possidentis.”

Section 125 CrPC- Wife Entitled For Maintenance After Divorce If She Is Not Living In Adultery: Kerala HC [Read Judgment]