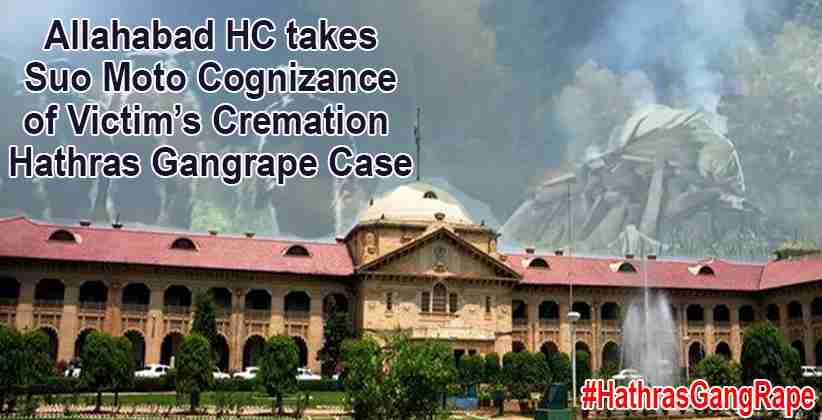 Judiciary Oct 02, 2020 Meghna Mishra ( Editor: Ekta Joshi ) 14 Shares
14 Shares
Suo moto cognizance has been taken by the Allahabad High Court for the cremation of the 19-year-old victim of the Hathras Gang Rape incident. The young Dalit woman was mutilated and gang-raped. She succumbed to her injuries and passed away in the Uttar Pradesh town of Hathras.

The bench presiding over the current matter was Hon’ble Justices Rajan Roy and Jaspreet Singh. The bench opined, “The incidents which took place after the death of the victim on 29.09.2020 leading up to her cremation, as alleged, have shocked our conscience, therefore, we are taking Suo moto cognizance of the same”. The court also affirmed the reports that indicated that the victim’s body was forcefully cremated without any consent from the family. In the High Court order, the Bench stated that “we are inclined to examine as to whether there has been a gross violation of the fundamental rights of the deceased victim and the family members of the victim; whether the State Authorities have acted oppressively high handed-ly and illegally to violate such rights as if it is found to be so, then, this would be a case where accountability will not only have to be fixed but for future guidance also stern action would be required.”

According to the reports, the accused mutilated the tongue of the victim so that she could not disclose the identity of her abusers. The police conducted her cremation forcefully upon her death before Dawn at around 2.30 AM on September 30, 2020. Various media reports have also indicated that the family was forcefully kept away from the cremation and the police prohibited the victim’s family from seeing her even though the family pleaded to not cremate their daughter.  The court added that if the allegations of this cremation without the family’s consent is found to be true, it would lead to grave implications. The court further stated that “it would be a case of gross violation of basic human and fundamental rights enshrined under Article 21 and Article 25 of the Constitution of India in a most blatant and uncalled for manner something which is absolutely unacceptable in our country governed by Rule of Law and the Constitution”. Article 21 of the constitution provides for the “Right to Life and Liberty ” and Article 25 of the constitution provides for the “Freedom of conscience and free profession, practice, and propagation of religion” The court has ordered the “Senior Registrar the Court's Bench at Lucknow to register a Suo motu Public Interest Litigation with the title In Re: Right to decent and dignified last rites/cremation and place it before the appropriate Bench having jurisdiction to hear Public Interest Litigations.”  The matter will be heard on October 12th, 2020. The family of the victim will also be present. The State functionaries that are summoned are: The court has also given strict orders to the State Authorities to ensure that there the family of the victim is not coerced or faces any influence or pressure.