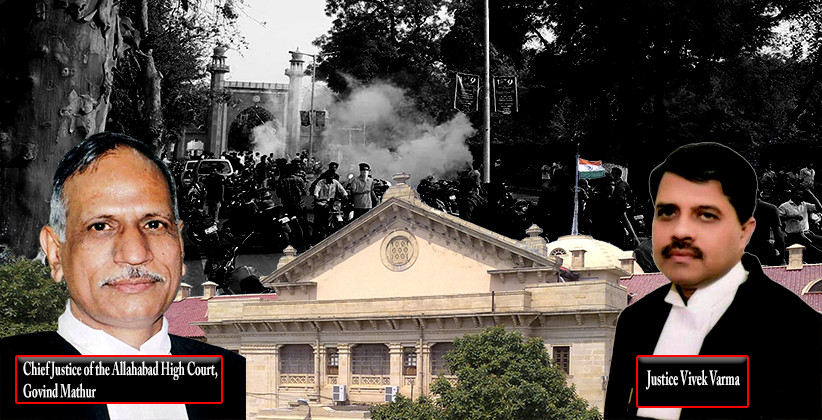 The Allahabad High Court today (December 20, 2019) directed the District Magistrate of Aligarh to provide free medical aid and assistance to the students of the Aligarh Muslim University who were lathi charged for no valid reason. The Court further directed the State to file a reply in response to the plea filed by AMU students against the violence which took place on Sunday (December 15, 2019).

A division bench comprising of the Chief Justice of the Allahabad High Court, Govind Mathur and Justice Vivek Varma held that the police indeedhad entered the college campus without justifiable reason and resorted to radical measures like lathi charge and firing tear gas when the protests were peaceful.

The petitioners also informed the court that the police personnel had forcefully entered the guest houses where the students were hiding in order to torment them. The petitioners sought recovery of the CCTV footage recorded from the cameras placed inside the campus so that tampering of evidence by the police could be prevented.

In light of the arguments presented by both the sides, the bench held that, “Having considered the facts, we deem it appropriate to have a necessary counter to the writ petition from the Respondents no. 3, 4 & 5 by the next date of listing. The District Magistrate, Aligarh is directed to ensure all necessary medical assistance and aid, if any required to the students and persons said to be injured as a consequence to the lathi charge or by any other means during the incidence of 14.12.2019 and 15.12.2019 and also subsequent thereto, if any taken place in the campus of Aligarh Muslim University.”

The matter is listed for next hearing on January 2, 2020.