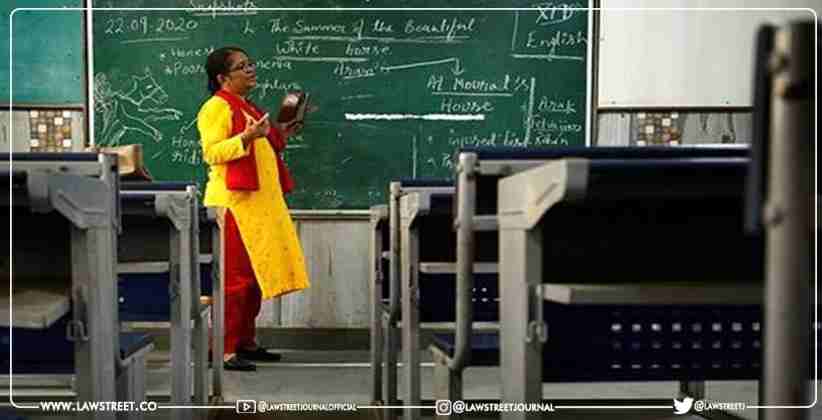 The Allahabad High Court (Division Bench) recently refused to interfere in the Single Judge order dated Jan 27, 2022, staying the decision of the Uttar Pradesh government to appoint 6800 additional candidates as primary assistant teachers in the state in addition to already appointed 69000 candidates.

With this, the bench of Justice Devendra Kumar Upadhyaya and Justice Ajai Kumar Srivastava-I endorsed the decision of the Single bench order of Jan 27, 2022, wherein it was concluded that the UP Government can't appoint more than 69000 candidates without issuing an advertisement regarding the same, since in the original advertisement issued by the state, only 69000 posts were intended to be filled.

The background of the case

Essentially, in the original advertisement (for the post of assistant teachers) issued in December 2018, 69000 posts were intended to be filed by the UP Government. However, after all the posts were filled up, the Government came out with an additional appointment list containing the names of 6800 candidates.

This very decision was challenged in a writ petition filed by Bharti Patel And 5 Others before the Allahabad HC.

Justifying its decision, the state government had sought to explain the backdrop against which it came out with the additional list. It was told to the Court that certain reserved category candidates had filed petitions before the High Court in 2020, challenging the appointment made to 69000 posts pursuant to the December 2018 advertisement.

It was the contention of such reserved category candidates that since they had secured marks higher than the cut-off for the general category, therefore, they were entitled to be considered and selected for the unreserved posts.

Therefore, the Statze revisited the implementation of reservation policy and took a decision to issue a fresh select list containing names of 6800 candidates, and these 6800 names were of those reserved category persons who had secured higher marks than the cut-off for the unreserved category.

Having heard both the parties, the Allahabad HC's Single bench had stayed the decision of the Uttar Pradesh government to appoint 6800 additional candidates as primary assistant teachers.

The challenge to the Single Judge order

Now, in the instant matter, a challenge was made to the locus of the petitioners who have moved to the HC challenging the state government's decision to appoint 6800 additional candidates as primary assistant teachers.

It was argued that the petitioners had failed to establish infringement of any legal, statutory or constitutional right, which can be said to have occurred on account of the decision of the State Government issuing an additional select list of 6800 candidates.

In this regard, it was further submitted that the writ petition was not maintainable at the behest of these respondents as they can only be said to be prospective applicants in case any future vacancies take places.

The Court, at the outset, noted that the findings recorded by the Single Judge weren't erroneous in law as the single judge relied upon a well-settled principle of law that no appointment can be permitted to be made in excess of the number of vacancies advertised and without subjecting such vacancies to selection.

Further, the Court also stressed that if the State or its instrumentalities are allowed to make appointment against the vacancies which are in excess of the number of vacancies advertised, then the same would be in clear violation of Articles 14 and 16 of the Constitution of India.

Lastly, regarding the challenge to the locus of the petitioners before the single judge, the Court concluded that whether or not those petitioners succeed in the earlier litigation, they would still be deprived of their right of consideration against these 6800 acancies.

"By taking the decision to fill up in 6800 vacancies which are admittedly in excess of 69000 vacancies which were advertised, these vacancies would never be either advertised or subjected to any selection which would clearly infringed upon the right of these respondents to participate in the selection...By not subjecting these 6800 vacancies to any selection and by simultaneously deciding to fill them up, certainly results in denial of right of consideration of the petitioners of the writ petition," the Court added.