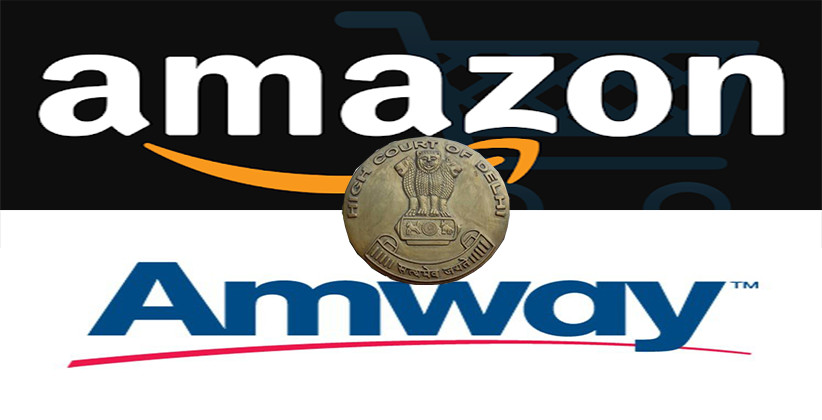 The Delhi High Court pronounced it's judgement in the case of Amazon v. Amway & Ors on 31st of January, 2020. The judgement was passed by the Division bench of Justices Dr S Muralidhar and Talwant Singh.

Appeal had been filed by Amazon, Flipkart and others. The order that had restrained several e-commerce platforms from selling products of Amway, Oriflame and Modivare without the consent was set aside. The court held that "Direct Selling Guidelines of 2016" are purely advisory in nature and do not qualify as law.

What was the order?

In July 2019, A Single bench judge of the High court granted an interim injunction in favour of Amway and other entities in the purview of unauthorized sale of their products on e-commerce platforms.

The court has further held the Direct Selling Guidelines (DSGs) as fully binding in nature and further amounting to law. It was held that the sellers as well as the platforms were bound to take the Direct Selling Entities' (DSE) consent to offer, display and sell the products. In furtherance to the order, e-commerce platforms were not given the entitlement to the benefit of the principal of "Exhaustion of Trademark Rights" and due diligence was required by the platforms to continue to enjoy the intermediary status. The tort of inducement to breach of contract had paved the existence of the contract between online platforms and DSEs like Amway.

The present division bench noted that it was highly unlikely that the issues framed and adjudicated upon by the single judge at the time of grant of interim reliefs would sustain as issues in suits themselves.

In a civil suit, the court requiring the Union of India to address an aspect was a deviation from the Civil Procedure Code, 1908. If the court has original jurisdiction, it doesn't entitle the court to assume powers of a writ court. The issues that were formulated by the Single judge as to whether the DSGs were valid and binding were "erroneously framed, " the Court observed. The guidelines are only a model framework and advisory in nature.

The guidelines do not attain the status of law within the interpretation of Article 13 just by merely being notified in the official gazette.

The source of the power to frame such guideliness are traceable only to the Consumer Protection Act 1986.

“The distinction between rules, which are made under a statute, regulations, which also ought to be traced to a statute, and mere 'guidelines‘, was lost sight of by the learned Single Judge. The Plaintiffs appear to have jumped the gun in not waiting for the law to be formally made and enforced.”

Does Selling Amway products on e-commerce platforms amount to infringement of trademark rights?

The fundamental error was committed by the Single Judge in holding Amway and others as the owners of their respective trademarks.

Amway, Oriflame etc, were not the proprietors of the trademarks being used by them as the same had been registered in the name of their overseas parent entities.

This was entirely outside the purview of the pleadings and could not be considered as the infringement or passing off.

The contentions that were put forth by the parties in their submissions could not be invoked by the e-commerce platforms under the Section 30of the Trade Marks Act, 1999 in the terms related to the "principle of exhaustion".

Report of the Local Commissioner had been considered as well.

Are e-commerce platforms 'intermediaries' under the IT Act?

The Section 79 of the Information Technology (IT) Act, 2000 was misinterpreted as well. Under Section 79- Any intermediary that complies with sections 79 (2) or (3) of the Act would not be liable towards a third party for the information, data, communication posted by it. Only after the trail it could conclude the entity's intermediary status.

A prima facie evidence by Amway and others had failed, for the grant of interim relief to have gotten established and thereby the order of the Single judge had been set aside.

The Court, therefore, upholding the above, opined that Amway and others had failed to establish a prima facie case for grant of interim relief and the order of the Single Judge was set aside.

Award of Rs. 50,000 in each appeals had been awarded by the Court to be paid by the plaintiffs in the suit to the E-commerce platforms.