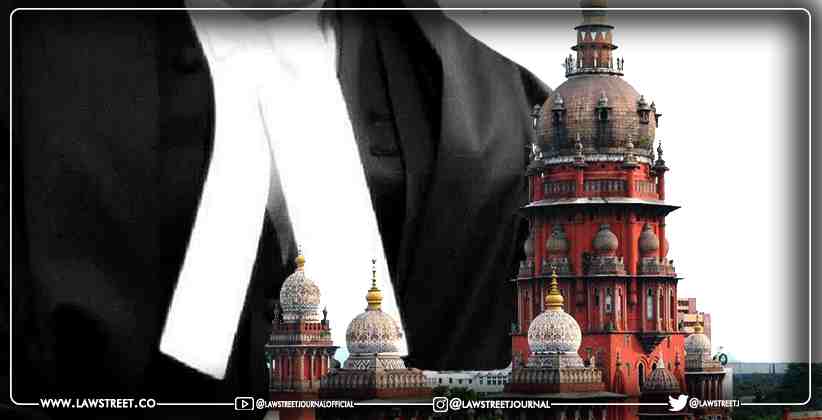 The Madras High Court on June 17th,2021, Thursday, disposed of a petition filed assailing the validity of an amendment that was made (in the year 2019) to the rules under the Law Officers of High Court of Madras and its Bench at Madurai (Appointment) Rules, 2017 which govern the appointment of government advocates.

The Bench of Justice T. S. Sivagnanam and Justice S. Ananthi upheld the validity of sub-clause (k) in Rule 4(i), which stipulates the eligibility for being appointed as Government Advocates.

The rule under challenge

The amended Rule states that no person shall be eligible for appointment in the High Court as a Government Advocate unless he furnishes a letter given by his senior to the effect that he has assisted him and worked in the High Court for not less than three years.

It was also argued that the impugned amendment denies equal opportunity to the meritorious candidates to be considered for appointment as law officers representing the State in the High Court of Madras and its Madurai Bench.

Additionally, it was also argued that there would be consequences, which will occur if inexperienced advocates are appointed as law officers and that it would affect the administration of justice of this Court.

At the outset, the Court noted that the writ petition did not challenge any appointment orders issued to the Government law officers, rather, the challenge was to the amendment to the 2017 Rules.

Thus, taking note of the Judgment of the Madras High Court in the case of V. Vasanthakumar vs. The Chief Secretary, Government of Tamil Nadu, the Court observed:

"The task of selection of Government Advocates is in the exclusive arena of the Government and/or its instrumentalities, judicial review of such appointments would be limited only to examining as to whether the process of appointment is vitiated by any irregularity, illegality, perversity or irrationality."

Further, finding no irrationality or illegality or arbitrariness nor any discrimination in Rule 4(i)(k) for it to be struck down, the Madras High Court said:

"To the best of the knowledge of this Court, every senior would always cherish and be proud of the achievements of his / her juniors when they occupying various positions…The petitioner should give utmost credence and solemnity to the letter given by the senior certifying that his junior instructed him in the matters before this Court for a period of three years."

The court was of the opinion that very often, it takes more than three years for a young member of the Bar to be included in the bottom of the list of names of advocates in the vakalat filed by the office of the senior.

The court also noted the submission of the state Government that the process of selection is yet to begin and every care would be taken to select and appoint the best candidates in a fair of 2021 and transparent manner.

Therefore, the court noted that it was too early for the petitioner to presume and assume certain things and that all actions, which may occur at a future point of time, would be not sustainable.

Noting that on a request made by the learned Advocate General, the Government of Tamil Nadu had appointed counsels for the Government to appear in civil and criminal cases temporarily until the law officers are selected and appointed in terms of the Rules, the Court observed:

"We are not required to test the correctness of the said Government Orders and all allegations and aspersions cast upon such temporary appointments have to be necessarily eschewed and are accordingly, eschewed."

In this context, the Court also noted that the Advocate General, who appeared before the Court through video conferencing, had also mentioned that those appointments are to enable the Government to represent before this Court and to ensure that the proceedings before this Court are not in any manner affected on account of absence of law officers for the State.

Before parting with the matter, the Court observed that due care and caution be taken by the respondents in conducting the selection process and appointing counsels to appear for the State Government, so that, effective assistance could be given to the Courts.

The Court also asked the State Government to take steps to give wide publicity to the law officers selection process by issuing paper publication, sending messages and in turn, the respective Advocates / Bar Associations can inform their members about the forthcoming selection.