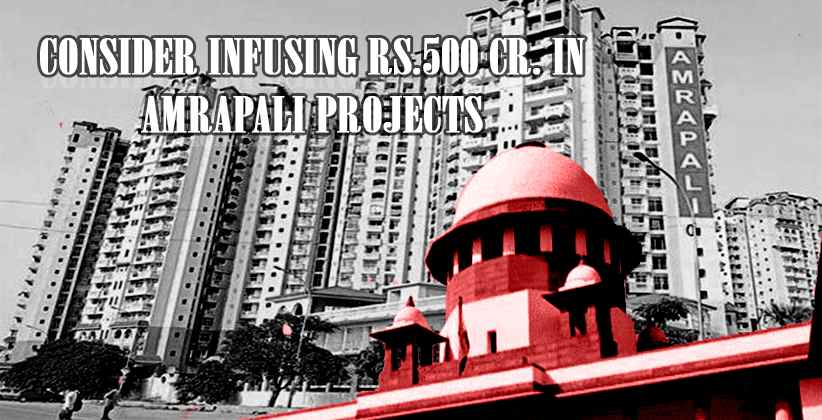 The Apex Court of India on 22nd May 2020, asked the Centre to consider imparting Rs. 500 crores as a loan to fuel the stalled housing projects of Amrapali Group and also requested a waiver on the imposed GST to the tune of Rs.1000 crores.

A bench of two judges comprising of Justice Arun Mishra and U.U. Lalit asked KM Nataraj the Additional Solicitor General of India, who was representing the Centre to informing the government to issue Rs.500 crore as a loan immediately, as there was no private player involved and the whole project is managed by NBCC. The Supreme Court also asked the Centre to consider waving off GST in the said matter.

Senior Advocate R. Venkatramani, a receiver appointed by the Supreme Court for the execution of the Amrapali Group housing projects, pleaded before the Top court to direct RBI into advising all banks and financial establishments which have given home loans to domestic customers to disburse all balance loan amounts to the home buyers whose accounts are regular.

It further stated - "If the payment is delayed beyond three months, 6 percent interest per annum will be levied till such payment. If the outstanding payment is not made within a total period of six months from the date of publication on the receiver's blog/website, the allotment of the home buyer may be canceled, subject to orders of the court."

It was also remarked by the receiver that funds from the sale of 5,228 unsold inventories are likely to be Rs 2,220.45 crores, those from the sale of other Amrapali properties, attached or otherwise, are nearly Rs 500 crore, and the bank loans to home buyers and balance receivable from all sold units are nearly Rs 3,870.4 crore with receivables from unsold units amounting to Rs 213.46 crore.

The court had appointed the said receiver to oversee the completion of the unfinished projects to ensure timely completion and handover to the home buyers, after grave irregularities on part of Amrapali firms and its directors were brought to the fore by an internal audit report earlier.