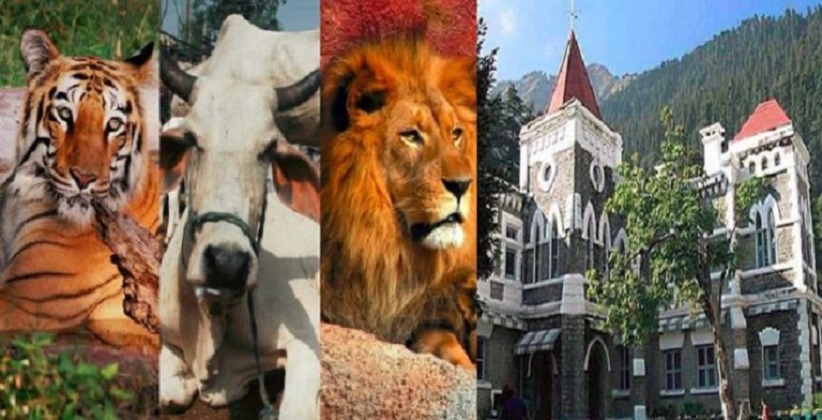 The Uttarakhand High Court on July 4th, 2018 granted a status of "legal person or entity" to animals in the state, saying "they have a distinct persona with corresponding rights, duties and liabilities of a living person."

The Division Bench comprising of Justice Rajiv Sharma and Justice Lok Pal Singh was hearing a PIL filed by Narayan Dutt Bhatt in 2014 seeking directions to restrict the movement of horse carts, or tongas between India and Nepal through Banbasa in Uttarakhand’s Champawat district.

The Bench said that “The entire animal kingdom including avian and aquatic are declared as legal entities having a distinct persona with corresponding rights, duties and liabilities of a living person” and all Uttarakhand citizens are “the human face for the welfare and protection of animals”.

The Court enlarging the scope of the petition directed the government to make sure that no animal, carries excess weight. It also banned the use of any “sharp equipment, to avoid bruises, swelling, abrasions or severe pain” to animals.

Further, the government was also directed to ensure “that in an area where the temperature exceeds 37 degrees Celsius between 11 am and 4 pm in summers and when the temperature is below 5 degrees Celsius between 5 am to 7 am and between 10 pm to 5 am in winter season no person is permitted to keep any animal used for the purpose of drawing vehicles”.

Adding to this, the court also gave directions on transportation of animals stating that “No goods vehicle shall carry more than six cattle. Each goods vehicle shall be provided with one attendant… The animals shall be transported on foot only when the temperature is between 12 degrees Celsius to 30 degrees Celsius… (animals must be) provided water with every two hours and food every four hours.”

“Every animal to be transported should be healthy and in good condition. A certificate of a veterinary doctor in respect of each animal to be transported is made compulsory as per Rule 4 of the Prevention of Cruelty to Animals (Transport of Animals on Foot) Rules, 2001”. Also, all veterinary doctors across Uttarakhand must treat all animals brought to them and in case the animal cannot be brought to the doctor, then the doctor must “personally visit and attend the stray cattle, or animal without delay”, the order stated.