Home Judiciary Arbitration- Enforcement Court May Refuse Enforcement of Foreign Award, But Cannot Set Aside or Correct It: SC
Judiciary 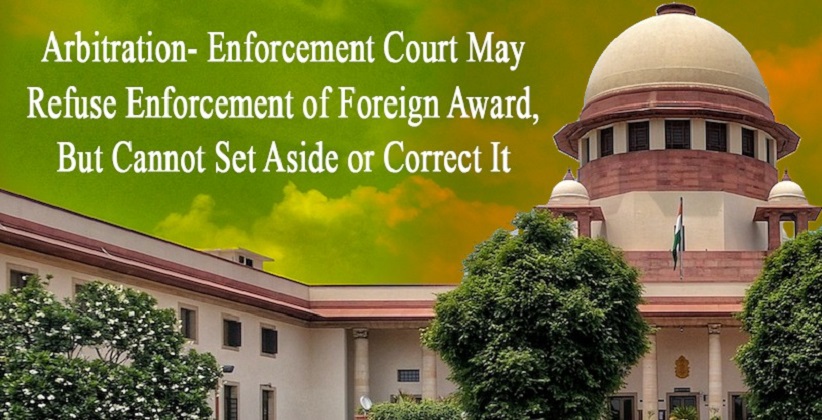 The Vedanta case is making headlines all over the country. Today, i.e. September 7th, 2020, the Apex Court of India ruled that Vedanta Ltd. was entitled to recover an arbitration award of USD 499 Million from the federal government. The arbitration award was for the development of oil and gas fields off the Indian coasts of Andhra Pradesh.  The Supreme Court also ruled that enforcement courts may be eligible to refuse the enforcement of a foreign award under Section 48 of the Arbitration and Conciliation act, 1996, but it does not have the authority to correct or set aside a foreign award under the same statute.

Section 48(1) (a) and (b) of the Arbitration and Conciliation Act, 1996 reads, “(1) Enforcement of a foreign award may be refused, at the request of the party against whom it is invoked, only if that party furnishes to the court proof that—

(b) the party against whom the award is invoked was not given proper notice of the appointment of the arbitrator or of the arbitral proceedings or was otherwise unable to present his case; ”[1]

The bench was headed by Justice S. Abdul Nazeer and comprised of other Hon’ble Justices Indu Malhotra and Aniruddha Bose who made the aforementioned observations. The bench was also in disagreement with the High Court’s view on the matter. The High Court stated that a foreign award can be enforced on its own strength, which makes it not dependant on the undergoing process of Section 48 of the 1996 Act

While elaborating more on the bench, the bench stated, “A foreign award does not become a ‘foreign decree’ at any stage of the proceedings. The foreign award is enforced as a deemed decree of the Indian Court which has adjudicated upon the petition filed under Section 47, and the objections raised under Section 48 by the party which is resisting enforcement of the award”[2]

The Bench also commented scheme of the Act for the New York Convention awards enforcement. The bench noted that Section 48 (1) and (2) also lay down seven ground wherein a foreign award can be refused.

Further, the bench stated that courts retained a residual discretion that will overrule the objections. However, if the court was of the opinion that “overall justice” has been doled out to the parties, the enforcement of the award may be directed.

Elaborating on this, the bench opined, “The opening words of Section 48 use permissive, rather than mandatory language, that enforcement ‘may be’ refused. The use of the words ‘may be’ indicate that even if the party against whom the award is passed, process the existence of one or more grounds for refusal of enforcement, the court would retain a residual discretion to overrule the objections”[3]

The code also stated that the enforcement of a foreign decree is governed under Section 44 A read with Section 13 of the Civil Procedure Code, 1908