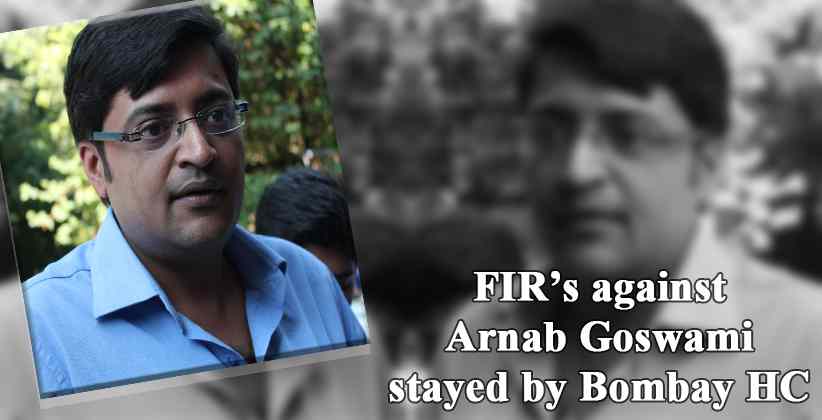 The Bombay High Court on 30th June 2020 granted interim relief to Arnab Goswami, Journalist, anchor, editor, and owner of Republic TV. A Division Bench of Justice Ujjal Bhuyan and Justice Riyaz Chagla stayed two FIRs filed by Mumbai Police against him over alleged communalization of the incidents of Palghar lynching and the gathering of migrant workers at Bandra railway station. The bench further observed that “prima facie no case was made against him”.

Arnab Goswami was charged under section 153, 153A,153B, 295A, 298, 500, 504, 505(2), 506, 120B and 117 of the Indian Penal Code. The bench ordered that there should be no coercive action taken against him. Senior Advocate Harish Salve and Milind Sathe appeared on behalf of Arnab Goswami. They submitted that the FIRs were politically motivated and were just filed to restrain voices against Maharashtra Government.

Harish Salve submitted that Maharashtra Government is being devious against Goswami and stated:

“At a time where the country is in lockdown, calling Arnab for investigation should be looked into. A party in power is calling a journalist for investigation because he made an adversarial statement against the leader of a political party. What was he asked, what is the structure of your company? Who owns Republic TV & Bharat? What is your wife’s role? What is the relevance of these questions?”

Salve further stated that a journalist has a right to report collective incidents like this and further recapitulated that Srivatsa YB and Gaurav Pardhi of Congress were tweeting about Arnab’s interrogation while he was still in the police station.

Salve further contended that “we have made serious allegations. However strong his comments may have been against the congress President, but to cross the line & invoke 153A is malicious. When you’re reporting on communal incidents & making a personal allegation of someone being communal, it comes within the Right to Freedom and Expression”.

Senior Advocate Kapil Sibal appeared on behalf of the State of Maharashtra and stated that section 19(1)(a) of the constitution does not include the right to indulge in communal propaganda.

Sibal submitted that “A journalist has a right to Freedom of Expression & right to a private investigation of an incident. But a journalist does not have a right to declare that a person got killed only because he was a Hindu. What if it turns out to be false after an investigation? We need to investigate the motive. Why did Arnab assume that the man was killed because he was a Hindu? What is this if not putting one community against the other?”

Regarding the second FIR, Sibal submitted:

“Arnab asked: who caused the congregation of a crowd near a Masjid? Why didn’t he ask- who caused the congregation of a crowd near Bandra Station? If Masjid was used just as a statement of fact, why did he twist the question? So, he is not using Masjid as a matter of fact. A journalist has no right to consider his investigation to be gospel & air it to create a disturbance. All of this will be investigated. It will be investigated as to why was he doing a series of such shows? What was his intention?”

Earlier, the Supreme Court declined to transfer the investigation from Maharashtra Police to CBI. The Supreme Court also turned down his prayer to quash the FIR stating that Article 32 of the constitution cannot be exercised for such purposes. However, the SC quashed multiple FIRs filed against Goswami and confined investigation only on the FIR lodged in Mumbai.

The SC bench comprising judges DY Chandrachud and M R Shah granted interim protection from arrest and gave liberty to him to move the Bombay High Court with respect to the quashing of the FIRs.