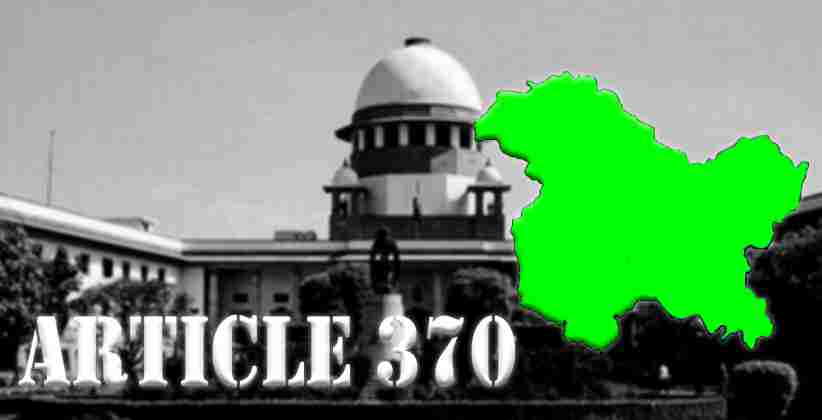 A five-Judge Constitution Bench of the Supreme Court headed by Justices NV Ramana and comprising Justices SK Kaul, R Subhash Reddy, BR Gavai and Surya Kantis presently hearing the matters related to the constitutional validity of the abrogation of Article 370 of the Constitution which has effectively removed the special status granted to the Jammu & Kashmir state. Today was the 5th day of hearing and some interesting exchanges between Attorney General (AG) KK Venugopal, Solicitor General Tushar Mehta and Senior Advocate Rajiv Dhavan took place in the court room.

Senior advocate Rajiv Dhavan conveyed to the court at the beginning that he supports the AG in question of reference to a larger bench, as there is no need to do it.

AG countered to the submissions made by Senior Advocate Zafar Ahmed Shah yesterday by saying that the tribesmen under command of Pakistan army officials had come till Baramulla & “raped & killed right through” prompting the then Maharaja to seek help of Indian army. He also explained on how accession of J&K to the Indian Union had taken place and added that “it is irreversible”.

AG KK Venugopal while defending the government’s move to abrogate Article 370 told the Supreme Court that “the sovereignty of J&K was always temporary and India is after all a Union of States.”

At the end AG told the court that all questions regarding Article 370 and power of Parliament under it were settled in earlier judgments and there is no need to reopen it.

Following AG, the Solicitor General (SG) Tushar Mehta while making submissions concurred with AG and told the court that Prem Nath Kaul and Sampat Prakash judgments may have taken different perceptions but there is no conflict and hence, matter need not be referred to a larger bench.

Solicitor General Tushar Mehta pointed out to the Court that "No argument favouring secession or giving wrong picture about Kashmir should be permitted”.

Rajeev Dhavan further argued that a treaty and a J&K Constitution are in reality dismissed by the government’s move and for the first time Article 3 is used to demote any state in the constitutional history of India. He also criticised the imposition of the President’s rule prior to the abrogation of Article 370.

When AG proceeded to handover to bench copies of the Pakistani media reports on the SC hearing, Dhavan opposed it and said that AG is giving political argument. To which SG countered by saying that yesterday’s argument by Senior Advocate Zafar Ahmed Shah were also political.

AG defended his historical arguments made at the beginning of the submissions by saying that he had to make it as a reply to what the opposite side had said it in their arguments and submissions.

Justice BR Gavai also said that they had to hear what AG had to say as they had already heard the other side on historical perspective.

When Rajiv Dhavan showed the maps of J&K, SG objected to it and asked why he was not arguing on merits. Dhavan was quick to bounce back by saying that if AG can rely on Mountbatten to criticise former PM Jawaharlal Nehru, then why he cannot show the map of J&K.

Following this ruckus Justice BR Gavai inquired with Dhavan on what was the point of showing the map, to which Dhavan replied by saying that he wanted to point out that a brick state has been reduced, dismembered and devoured by two powers.

At the end of the hearing, bench has reserved the order on the issue of reference of the matter to larger bench.