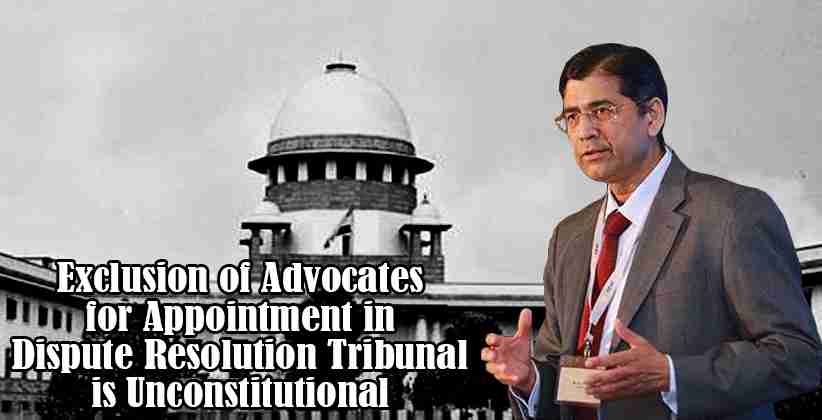 The Supreme Court on October 1, 2020, resumed the hearing on the plea filed by the Madras Bar Association which challenges the Tribunal Rules of 2020, on the ground that it is in the teeth of the principles of separation of power and independence of the judiciary.

The 3-judge bench of justice L Nageswara Rao, Hemant Gupta, and Ravindra Bhat are hearing this matter and Arvind Datar Senior Advocate from the side of Madras Bar Association. He concluded his rejoinder submission on October 1, 2020.

Mr. Arvind Datar said that Rule 9(2) of the impugned Rules which provides that the vice-chairman, vice-president, or other members of the tribunals shall hold office till the age of 65 years or for a term of 4 years, whichever is earlier.

He said that "Out of the 19 tribunals, in all the 18, with the exception of the DRT, the Vice Chairman and the member can only be an HC judge. Now if a judge retires at the age of 62 years, then by virtue of this Rule, he would only get 3 years in office! Nobody is going to join prior to retirement. And it is not like the incumbent would assume office immediately upon selection in an instance the retired Allahabad High Court judge who has was elected lost almost nine-month in the modalities of receiving the appointment letter before he could join the office.....so this rule needs to be struck down.....the 2017 Rules granted tenure until the age of 67 years to the vice-chairman I don't know why it has been brought down to 65 now?".

Moreover, he also opposed that the exclusion of advocates from being considered for appointment as Presiding Officer of DRT -

"For the last two 25-27 years, advocates have been regularly appointed. There has been no problem. This provision requiring the appointment of any judicial officer is a regular it is absolutely unconstitutional that even in the case of one member Tribunal lawyers are excluded there are no Law commission reports that lawyers have done any disservice".

Thereupon, he discussed Rule 4(2) Tribunal Rule of 2020 that "The Search-cum-Selection Committee shall determine its procedure for making its recommendation and after taking into account the suitability record of past performance integrity, as well as adjudicatory experience keeping in view the requirements of the Tribunal appellate Tribunal or as the case may be an authority, recommended a panel of two or three persons for appointment to each post".

Further, he contended that "The need to struck down. 2-3 candidates per post are not permissible. Even in the IAS, where there are 5 vacancies, the zone of consideration is 10 candidates...."

He said that “Each tribunal is treated as part of the department of a ministry.... tomorrow; the government may say that we have made the appointment but sorry, the post of the SC judge on the committee was vacant... so Rule 4(3) has to go! Also, a secretary to the Minister under which the tribunal functions cannot be on the Committee as it undermines independence".

He said on the aspect of retrospective application of the Rule 2020, he advanced, “The 2017 Rules were quashed. It was the mandate of the Supreme Court that new Rules be framed. That was not done. And now they say that the 2020 Rules would apply retrospectively. If it is allowed in then all judges who were earlier required till the age of 67 years would go out of service as the age has now been reduced to 65 years... the law is settled at once the old rules have gone and the new Rules are brought in the letter shall apply prospectively!"

Mr. Arvind Datar referred to the persons appointed under Rules 2017 that was available - "By virtue of an interim order of the Supreme Court, members of ITAT and members (judicial ) CESTAT has been allowed to continue till the age of superannuation of 62 years which means there will no 3 years or 5 years... it will be manifestly inappropriate if their term now stalls prior to 62years, upon completion of other 3 years or 5 years... person appointed during the pendency of the Rules are deemed to have been appointed under the Old Acts and Rules. So, whoever has been selected now shall in the case of ITAT and CESTAT, continues till the age of 62 years... even the appointments after Roger Mathews are not to be disturbed if the incumbent is found qualified under the new Rules. Otherwise, they shall continue until normal retirement".

Justice Hemant Gupta observed that those who are appointed under the 2017 Rules are to complete the tenure and the retirement is to be read that way.

Justice Ravindra Bhat noted that "this is due to the Proviso to the provision of the Finance Act otherwise, normal retirement would be under the Parent Act"

Mr. Arvind Datar contended that "The interim orders direct that the appointment to the tribunal or the appellant criminal can be as per the Old acts and rules which held the fort before the Rules 2017. So, the tenure is to be determined as per the statute, which is in the case of National green tribunal would be until the age of 67 or 5 years...if the Rules where quashed there can't be a vacuum".

Justice Ravindra Bhat said that "The submission is textual but the non-obstante clause (Section 183 of Finance Act) cannot be operated in isolation. it can work only if the rules and the terms and conditions of the service are there".

Finally, Mr. Arvind Datar said that the major fault of the system is that Chairman and Vice-Chairman, everyone is deemed to be a "member" and that no distinction is made. He argued that “Would a retired Supreme Court or High Court judge come before the SCSC for an interview? Out 19, 9 tribunals require a Supreme Court Judge as its chairman. Supreme Court Judges are recommended by the Chief Justice of India or by Collegium...there is no question of them going to SCSC, which comprises secretariat to ministries to answer the question. It is completely unconstitutional".

Further, he said that the greatest difficulty which is associated with All India Tribunals is housing and many Judges who were offered this post refuse the post by saying housing is not provided by the tribunal.

According to Rule 15 of Tribunal Rule of 2020 is on housing and residence. There is no provision of housing but it only provides House Rent Allowance (HRA).

Justice Hemant Gupta has asked that “In the Competition Commission of India there is no provision for giving housing or even a vehicle. But the salaries of the Chairman and members are 4, 25,000 and 3, 75,000 respectively which are substantial amounts. Why can the Rules not be the same for the Tribunals? Compensation in money can be given as an alternative to accommodation?"

Mr. Arvind Datar said that “Is it practical to tell a retired judge to take 1 lakh and find their own homes? Especially in a place like Mumbai, Delhi and Chennai Would a good person want to come then? Would anyone leave their family and come?"

Mr. Arvind Datar also says that In All India Service for obtaining the housing facility there is a website and one has to log in and fill the application form. Afterward, they are given an application number and there is a waiting list...Can a retired Supreme Court judge be expected to search for a house on rent after retirement? He further said that "In All India Judges case, the government was to refer 10,000 houses but managed only 5000. The Court said that making arrangements for 5000 more houses all over India is not difficult. Subsequently in 2001, the Court stressed that the accommodation has to be given and the provision regarding the payment of 12.5% of salary as the event was struck down. And this was for district judges, while these are retired Supreme Court Judges we are talking about! Here, the question is of only 18 Supreme Court Judges all of whom are in Delhi. The total number of all the members of the tribunal would be almost 500 the Government can't find houses?"

He concluded his submission arguing that 2020 Rules to be struck down as it is unconstitutional. The bench then directs that the rules be framed as the Roger Mathews and make observations regarding housing.