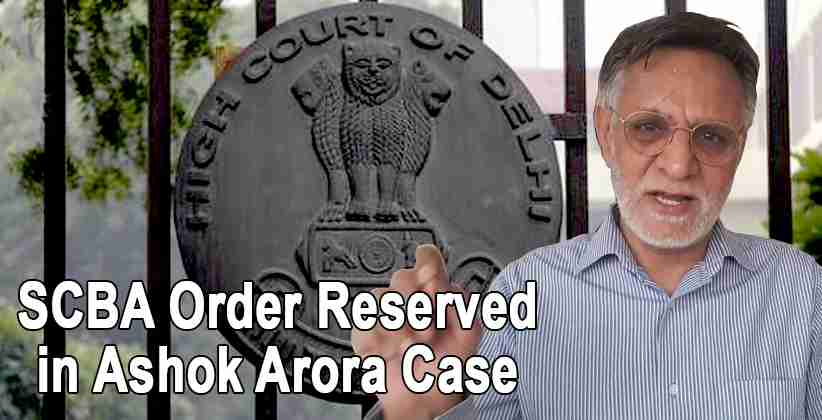 Single Judge Bench of Justice Mukta Gupta of Delhi High Court has reserved order in a plea filed challenging the decision of suspension by the Executive Committee of Supreme Court Bar Association. The Committee’s decision was to suspend Ashok Arora from the post-Secretary, the plea was filed by him. The Supreme Court Bar Association suspended its Secretary Ashok Arora on May 8th, 2020 effective immediately after the Executive Committee took this decision in a meeting.

On June 5th, 2020 by issuing a notice the SCBA asked Arora to show cause as to why a three-member committee’s ex-parte proceedings should not be proceeded against him for the alleged accusations against him, prior to which on Arora circulated a message amongst SCBA members as an attempt to call an Emergent General Meeting (EGM) on May 11th, 2020 in order to discuss the removal of President Dushyant Dave for passing a resolution on February 25th, 2020 condemning public remarks made by Supreme Court Justice, Justice Arum Mishra, in praise of Prime Minister Narendra Modi.

Ashok Arora has further accused the Executive Committee of intimidating him several occasions and alleged that the conduct of SCBA’s President has brought disrepute to the bar. He also said that President Dushyant Dave is using his office to remove him (Ashok Arora) from his primary membership of the Bar Association as well.

Appearing for the SCBA Senior Advocate Arvind Nigam placed his reliance on Rule 35 SCBA rules and said it is misplaced. Arora used this rule and accused that according to this rule he is been removed wrongly and his removal in violation of the principle of natural justice.

Nigam said that the Executive Committee was called by President in accordance with Rule 14. He also said that there are three precedents for removing elected members from their respective posts. Nigam also said that the principle of natural justice was followed as Arora was given a chance to present his views and speak in the meeting. The Court was also told that issue of removal is also pending before a committee of three retired judges.

Further in an extraordinary move, the Bar Council of India also intervened. Advocate Rajdip Behrua appeared for the BCI and said BCI has requisite powers to regulate the conduct of advocates, replying to this Nigam said that BCI has no power or authority to interfere in the internal management affairs of private associations like SCBA. He also stated that as per Section 7 of the Advocates Act and the Supreme Court's judgment in Harish Uppal, the power to exercise jurisdiction over advocates was vis-a-vis conduct which is impugned upon the court work.

Further BCI also stayed the order of the Executive Committee by virtue of which Arora was being suspended from the elected post of Secretary.