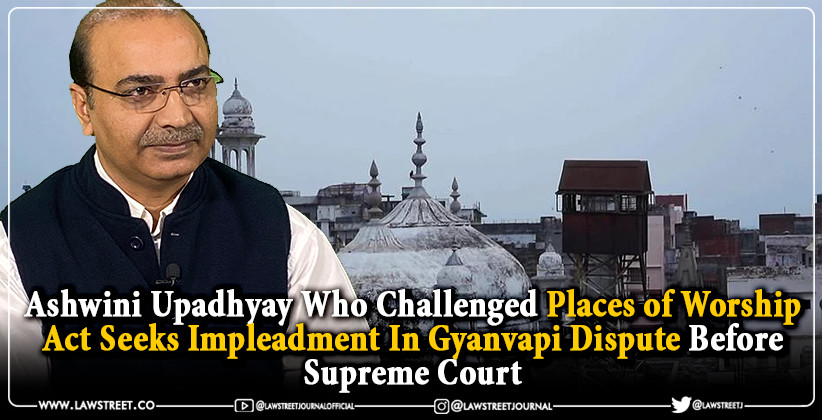 BJP leader and Advocate Ashwini Kumar Upadhyay has moved the Supreme Court to seek impleadment in the Gyanvapi row. Previously, Adv. Upadhyay had filed a public interest litigation petition challenging the constitutional validity of the Places of Worship (Special Provisions) Act, 1991 (hereinafter, the Act) in October 2020 and the Supreme Court had issued notice on his plea in March 2021.

Upadhyay has stated in the application that the Places of Worship Act of 1991 cannot govern the Kashi Vishwanath Temple – Gyanwapi Mosque issue.

In the present application, Upadhyay has sought impleadment for appropriate appreciation of the facts-circumstances in the case.

In addition, the Act mandates that any similar matters that are already pending in the courts must be dismissed. In spite of this, the Act made an exception for the Ram-Janambhoomi site, which served as the rationale for the courts, including the High Court and the Supreme Court, to consider the case at issue.

This law was cited by the Supreme Court in 2019 when it decided to give the controversial land in Ayodhya over to the child deity Ram Lalla. The land in question had been exempted from the law. On the other hand, the Supreme Court has reaffirmed that analogous cases cannot be accepted with respect to other sites because of the Act.

However, the 1991 Act maintained a cut-off date of 15th August 1947 in order to legalize the illegal acts of barbaric invaders, though Hindu Law (Temple Character never changes) was ‘Law in force’ at the commencement of the Constitution by virtue of Article 372(1), it was submitted.

Upadhyay also claims in his application that the religious character of the Temple does not change by demolition, its character can only be altered when the idols are replaced.

The application states that,

"It is submitted that Hindus Jains Buddhists Sikhs have the right to profess, practice and propagate religion as provided in their religious scriptures and Article 13 prohibits from making law which takes away their rights. Moreover, the status of mosque can be given only to such structures which have been constructed according to tenets of Islam and mosques constructed against the provisions contained in Islamic law cannot be termed as Mosque."

He has further stated that “Temple’s religious character does not change after the demolition of roof, walls, pillars, foundation and even offering Namaz. After the Pran Pratishtha of idol, a Temple is always a temple until the idol is shifted to another temple with the rituals of Visarjan. Moreoever, religious character of temple (Place of worship) and Mosque (Place of prayer) is totally different. So, same cannot be applied on both.”

It is further submitted that,

"The mosque constructed at temple land cannot be a mosque, not only for the reason that such construction is against Islamic law, but also on grounds that the property once vested in the deity continues to be deity’s property and right of deity and devotees are never lost, howsoever long illegal encroachment continues on such property."

The Supreme Court had on Friday heard the Special Leave Petition regarding the Gyanvapi issue and had ordered that Order 7 Rule 11 Application being tried in the subordinate court of Varanasi be sent to the District Judge, as the Court was of the opinion that a seasoned hand would be required to handle the matter.