Home Judiciary 'Baba Ramdev advertised Coronil but did not prevent anyone from getting COVID vaccine': Delhi High Court
Judiciary 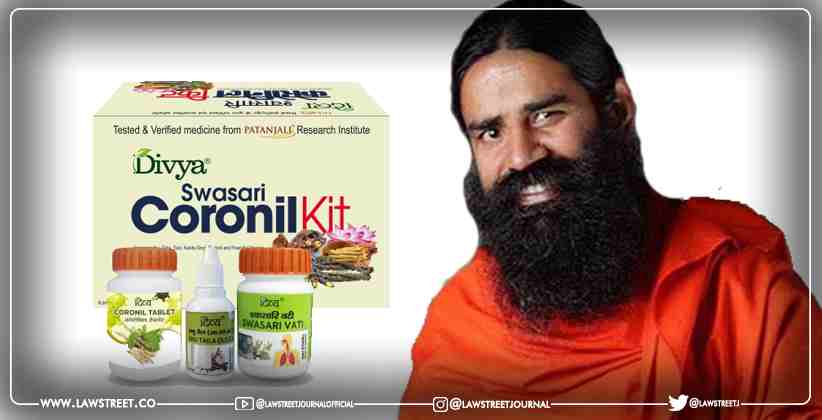 The Delhi High Court recently issued summons to Yoga Guru Baba Ramdev regarding a suit filed by Delhi Medical Association (DMA) for the averments made against allopathy and in favor of the corona kit, Coronil by Baba Ramdev.

In the outbreak of Covid-19 many individuals lost their lives and to prevent this almost a year after, a vaccine was brought and it started showing results. Amid this, Baba Ramdev has claimed that allopathy is a “stupid science” and medicines such as Remdesivir, Favi flu, and other drugs approved by the Drugs Controller General of India have failed to treat Covid-19 patients.

Also, in a video circulated in social media, Ramdev claimed that lakhs of patients died because of allopathic medicines rather than a shortage of oxygen.

Ramdev also stated in a video claiming Coronil as a cure for corona virus in just seven days. Soon after this, social media erupted, with many calling for legal action against Ramdev. A day later, the government in Maharashtra and Rajasthan came out with explicit warning to Patanjali against advertising or selling Coronil until the AYUSH Ministry has given its approval.

The objections were raised in the Delhi High Court as Baba Ramdev Started selling the medicines without even licensing and telling public not to follow the health protocols, to not go the hospitals and instead take coronil as a cure for Covid-19 in just seven days; and his statements started misleading the public.

In response to this, it was stated that, Baba Ramdev never stated to anyone to nkt take vaccines and the statement he has given about allopathy is his point of view and that he has a right to speech.

On asking how Ramdev’s statements affected the association; senior advocate Rajiv Dutta, for the DMA said, “He [Ramdev] is saying you have caused the death of these people. You have killed these people through your medicine. This man has a lot of following.”

The court said, “Ramdev is a person who doesn’t have faith is allopathy. He believes everything can be cured by Yoga and Ayurveda. He may be right or wrong.”

Justice C Hari Shankar was of the view that the statements made by Mr. Ramdev was his “opinion”, which falls under the right to freedom of expression under the Constitution. “I don’t think your allopathic profession is so fragile...I think it comes within Article 19(1)(a),” he said.

After hearing both the sides, the Delhi High Court directed Ramdev for not making statements against the allopathic medicines and for not advertising coronil as a cure for Covid-19. The court also refused to restrain Ramdev at that stage saying the allopathic profession was not so fragile. It however, orally asked Ramdev’s counsel to tell him not to make any provocative statements.