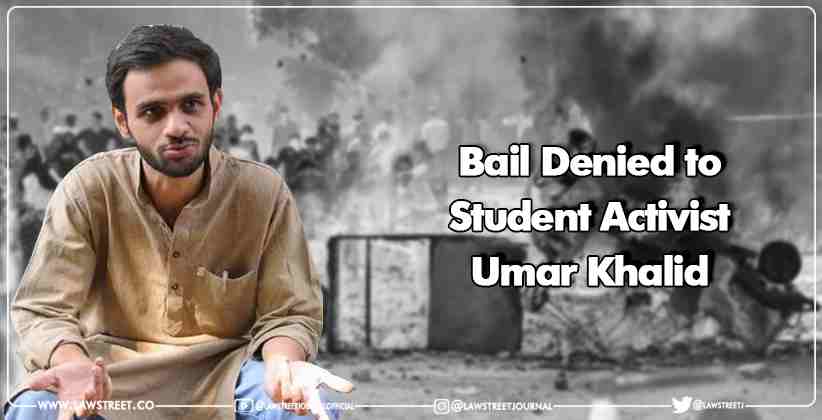 Student activist Umar Khalid has been denied bail by the Delhi High Court, in connection with a case alleging larger conspiracy into the Delhi riots of 2020. There are charges against Umar Khalid, under Indian Penal Code, 1860 and UAPA, 1967.

The judgement was given by the Bench of Additional Sessions Judge Amitabh Rawat after reserving it earlier this month.

The Court on the 21st of March had deferred ruling on the bail petition filed by Umar Khalid. Moreover, the order on Khalid's bail application was supposed to be issued on March 14, but it was postponed due to the filing of written submissions for Khalid over the weekend.

Senior Advocate Trideep Pais contended that the whole charge sheet issued by Delhi Police in FIR 59/2020 is a fiction, and that the case against him is based on video excerpts shown on Republic TV and News 18 that depict a truncated version of his speech.

Pais contended that television networks Republic TV and News 18 broadcast a truncated version of a speech delivered by Khalid in Amravati, Maharashtra on February 17 last year, refuting the prosecution's accusations.

The lawyer had stated, "Delhi police has nothing but Republic TV and CNN-News18 for the case."

Pais claimed that News18 deleted a key statement made by Khalid about the importance of unity and harmony from the video it aired.

The lawyer had stated that the charge sheet's hyperbolic charges "sound like a 9 p.m. new script of one of those shouting news channels" and are evidence of the investigating officer's "fertile imagination."

Pais further noted that while the anti-Citizenship Amendment Act, 2019 protests were secular, and the charge sheet filed by the Delhi Police is sectarian.

Pais further referred to the claim that Umar Khalid and Nadeem Khan were behind the formation of the Jamia coordination committee as a fertile imagination of the 10.

He further said that, while the prosecution insisted that chakka jam was the same as a terror act, Chakka Jam is not a crime and has been used by students and others during numerous agitations.

He went on to say that the chargesheet and FIR 59/2020 both exhibited a pattern of 'false implication' in the testimony of 'made up witnesses.' He said that one of the witness statements, taken three days before Umar Khalid's arrest, was fabricated to "fit the arrest."

It was contended that the remarks made by the investigative agency in the case were nothing more than a fabrication, a flimsy piece of evidence that would not stand up to legal scrutiny. According to Pais, the witnesses' stories were wildly discordant with one another, and there was no tangible proof to back them up.

He added "Even a 12 year old would know this is fabrication. They (prosecution) should be ashamed. Not even a shred of physical evidence. One doesn't need a cross examination to tell you that this one is a liar."

What did the Prosecution argue?
The prosecution maintained that Umar Khalid was only trying to create a perception by referring to the web series "Family Man" and the movie "Trial of Chicago 7," and that he had nothing to say about the case's merits.

Amit Prasad, the Special Public Prosecutor, had made the following argument: " "...he wants the application to be decided by a reference to a web series. He wants case to be equated as Family Man and Trial of Chicago 7. It's slightly unfortunate. Let us understand why he wants to equate with Family Man or Chicago 7. Because when you have nothing on merits, you want to go and create headlines."

"You create a perception, which is why when we conduct a google search for dates of hearings, when law is contested, we don't find anything. Everything was covered when the family man argued. The goal is to make an impression. You don't want to dispute about the law; instead, you want to argue about a topic that is current in the media."

Prasad contended that while the riots were painstakingly planned, they resulted in property destruction, disruption of critical services, and the use of petrol bombs, lathis, and stones, among other things, thereby fitting the conditions set out in Section 15(1)(a)(i), (ii), and (iii) of the UAPA Act, 1976.

According to Prasad, 53 people died in the riots, 142 people were hurt in the first phase, and 608 people were injured in the second phase.

He said that the 2020 sit-in protests were well planned, with key protest locations around 25 mosques chosen. He claimed that these locations had religious importance but were given secular names to give the supposed communal protests a more respectable appearance.

He mentioned a meeting on December 20, 2019 that included Umar Khalid, Harsh Mander, members of United Against Hate, Swatantra Nagrik Sangathan, and others.

He claimed that this conference was crucial in determining the protest places and measures for reducing police conflicts by putting women at the forefront.

While Umar Khalida's public image was of him defending the Constitution and waving the Indian flag, he had a different purpose.

The main emphasis of Prasad's claims was that the DPSG group was a highly sensitive group that carefully pondered every minor message before passing it on to other members. He said that every action he made was deliberate and well-considered.

While the prosecution's case is not that every person who comes forward in the conspiracy must be charged, and that simply remaining silent about a group does not make one an accuser, he stressed that if proof is found against anyone, criminal action must be taken.

In this context, he stated that the 2020 North East Delhi riots were the result of a 'conspiracy of silence,' with the goal of utterly paralysing the system.

Thereafter, a supplementary charge-sheet was filed in November against former JNU student leader Umar Khalid and JNU student Sharjeel Imam in a case related to the alleged larger conspiracy in the communal violence in northeast Delhi in February.