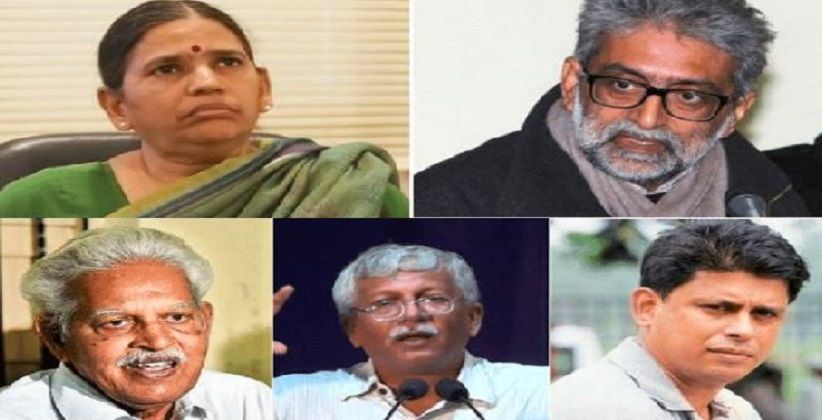 The Supreme Court today (September 28, 2018) has extended the house arrest of five activists arrested on August 28, 2018, by Maharashtra Police in connection with the Bhima-Koregaon violence case, for four more weeks.

The judgment was delivered by the Bench comprising of Chief Justice of India Dipak Misra, Justice AM Khanwilkar and Justice DY Chandrachud.

The Bench also refused to constitute a Special Investigation Team (SIT) to look into the arrests of lawyers and activists.

The judgment authored by CJI Misra on behalf of himself and Justice Khanwilkar stated that evidence does not show that arrests of activists were made to quell dissent or because of differing political ideology.

Extending the house arrest of poet Vara Vara Rao, lawyer Sudha Bhardwaj, and activists Arun Ferreira, Vernon Gonsalves and Gautam Navlakha for four weeks, the Bench noted that they can pursue relief in lower courts if they wish to.

Justice Chandrachud, dissenting from the majority opinion said that the petition was genuine. He lashed out at Maharashtra police for organizing a press meet and distributing letters to media when the matter was subjudice.

On August 28, 2018, the Maharashtra police had arrested the five activists in connection with an FIR lodged following a conclave ‘Elgaar Parishad’ that was held on December 31, 2017, that had later triggered violence at Koregaon-Bhima village.

On August 29, 2018, the apex court ordered the house arrest of the activists, saying “dissent is the safety valve of democracy”.

The Supreme Court on September 20, 2018, reserved its verdict on a plea filed by historian Romila Thapar and others seeking the immediate release of the five activists.