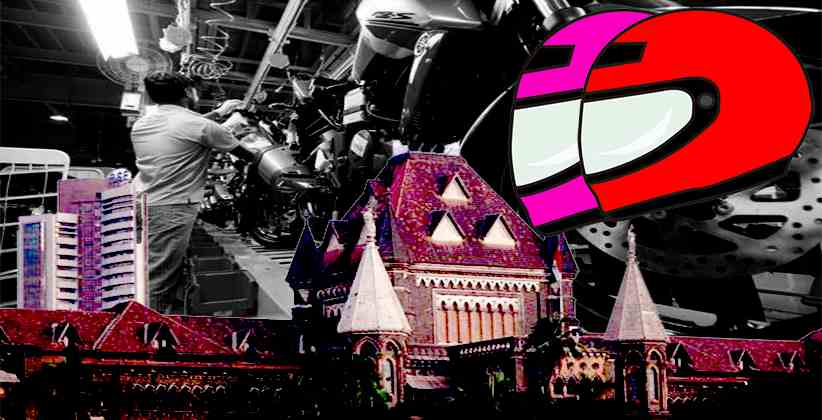 The Nagpur Bench of the Bombay High Court on 12th February 2020, Wednesday warned that it would abstain from registering of vehicles in Maharashtra in future if they wouldn’t comply with the norms which were earlier decided, keeping in mind the tough stand of the bench, on providing two free helmets to all the two – wheeler buyers by the automobile manufacturers and dealers.

A division bench comprising JusticeRavi Deshpande and Justice Amit Borkar has directed the government pleader Sumant Deopujari to file a compliance report on the same issue by granting six weeks to the State Government and transport commissioner in order to  intimate all manufacturers so that they strictly adhere to the Central Motor Vehicles Rules (CMVR), 1989.

A Public Interest Litigation (PIL) was filed by Social Workers Saurabh Bharadwaj and Manish Singh Chauhan with reference to the grave violation of CMVR. In the proceedings of that, the bench asked the respondents to make sure that all the rules and regulations are taken seriously and strictly followed.

Mentioning the CMVR, the petitioners through their counsel Avdesh Kesari made the point of two wheeler manufacturers and dealers to be under obligation of providing two protective headgears, or in other words Helmets, to the buyers, for drivers and pillion riders, in order to conform to the specifications of the Bureau of Indian Standards (BIS) Act, 1986. Currently, only one helmet is being provided to the customers or consumers while delivering the vehicle to them.

Deopujari further added, supporting the petitioners’ contention, that the Government had already written a letter four years back in 2016, to all the two – wheeler manufacturers to comply with CMVR and to provide two helmets to all the buyers which they didn’t follow.

Before the current issue, all the 16 dealers appeared before the High Court after being summoned in the last hearing. They included Tajshree, Sudarshan, Rishikesh, Arun, Nangia, KTM, Kusumgar, Paragon, AK Gandhi, Mascot, Universal, Jaika & Unnati. All of these dealers sell various brands of two-wheelers, but even then most of them failed to file replies to the High Court’s repeated directives.

One important thing to notice is that the dealers tried to pass the liability of supplying the helmets onto the automobile manufacturers and applied to add them as respondents in the concerned PIL. The judges snapped at them asking why did it take them over a year to file the replies. The court further asked the dealers the cost they would like to pay for the inordinate delay in filing replies and also warned them that they would stop the registration of all the vehicles in state but the dealers begged them to reconsider since it would lead to a lot of loss and havoc which would lead the automobile sales to come to a halt.

The petitioners requested the respondents to act against the dealers and manufacturers who aren’t providing helmets to customers and also prayed for the concerned directives for the state transport ministry to initiate probe against the Regional Transport Office (RTO) and file a report. They also demanded that the dealers should pay compensation to the family members of victim who died in road accidents without wearing helmets. They also insisted on cancelling the dealerships of respondents who failed in order to follow the CMVR norms.

The Union as well as the State Ministries for Road Safety and Transport along with city – based Regional Transport Office (RTO) are also parties under respondents. Assistant Solicitor General Ulhas Aurangabadkar held a brief for the Union Ministry.