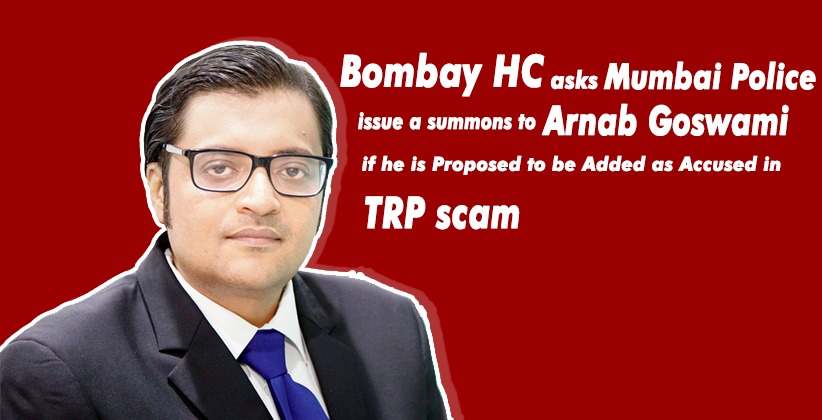 The Bombay High Court directed the Mumbai police on October 19, 2020, to issue a summons to the chief editor of Republic TV Arnab Goswami if he is proposed to be added an accused in the FIR alleging TRP (television rating points) scam.

The Bombay High Court hearing the plea to quash the FIR lodged against Republic TV in the TRP (television rating points) scam said that as of the date the media networks’ editor-in-chief Arnab Goswami is not an accused.

The three channels alleged to be involved in this TRP scam are Fast Marathi, Box Cinema, and Republic TV.

The company that installed these rating boxes called barometers on behalf of the Broadcast Audience Research Council (BARC) named Hansa Research had filed a case with the Mumbai Police saying some of the company’s former employees had leaked or sold the data of the households where these barometers were installed.

The data about the households where the barometers were installed was obtained by the three channels Fast Marathi, Box Cinema, and Republic TV and they would pay these households money to keep the channel on even when they were not watching it.

There were many households that did not understand English would switch on Republic TV at all hours for receiving money from the channel.

This manipulation helped Republic TV and the other two channels to hold the top spot for a long period of time and they would charge the advertisers more.

The petition had than been filed by Arnab Goswami, chief editor of Republic TV against Mumbai Police commissioner (CP) Param Bir Singh stating that the statements made by Mumbai Police commissioner (CP) in connection with the TRP scam, are false and political conspiracy and is done harass and intimidate from carrying their journalistic duties and exercise their fundamental right to freedom of speech and expression.

The petition further stated that the Mumbai Police commissioner (CP) Param Bir Singh has named the channel because of ill-will against the channel as they are questioning the investigation by Mumbai Police in the Sushant Singh Rajput case and the Palghar lynching incident.

The Republic Media Network had approached the Supreme Court but the court refused to hear the petition so they went to Bombay High Court to quash the FIR filed by Mumbai Police FIR in the alleged TRP Scam and also provide interim order protection from arrest to Arnab Goswami.

The bench comprising of Justice SS Shinde and M S Karnik in the Bombay High Court heard the petition on October 19, 2020.

The High Court refused to both quash the FIR in the alleged TRP scam and give protection from the arrest of Arnab Goswami.

The court further directed Mumbai police to first issue summons to Arnab Goswami if he is proposed to be added as an accused and he would appear and cooperate with the investigation if the summons is received.

The court also asked Mumbai Police to submit the progress of the investigation made in the past week.

The court issued a notice on the petition filed by Republic Media Network against Mumbai Police’s FIR in the alleged TRP scam.

On October 24, 2020, Arnab Goswami has been asked to be present before the Special Executive Magistrate and Assistant Commissioner of Police, Worli, Division.

The Bombay High Court has given the next date of hearing the petition on November 5, 2020  at 3 PM.