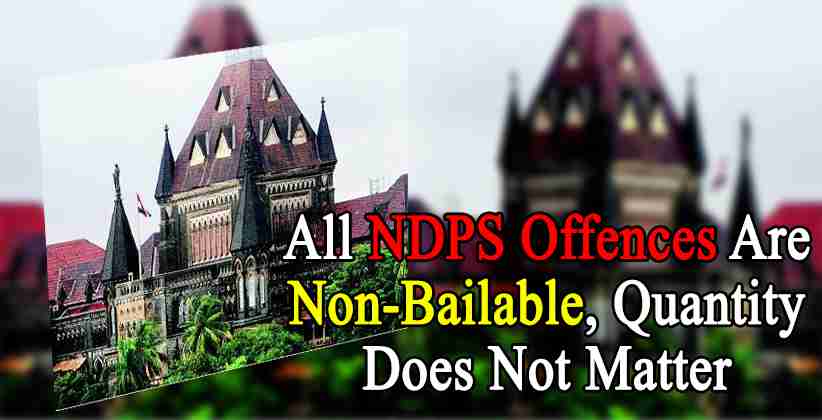 While granting bail to Bollywood actress Rhea Chakraborty, the Bombay HC held that any offence under the Narcotics Drugs and Psychotropic Substances (NDPS) Act, 1985 are non-bailable. This pronouncement was made in light of the case of Rhea Chakraborty v Union of India. The HC rejected the contention made by the counsel for Chakraborty and others accused that an offence that involved minuscule quantities of contraband are bailable under the NDPS Act, 1985.

Justice Kotwal said, “Section 37 makes all the offences under the Act to be cognizable and non-bailable and also lays down stringent conditions for grant of bail, the SC observed in Baldev Singh. The situation has not changed since 1999 when these observations were made by the Hon'ble Supreme Court. In fact, the situation has become worse. Therefore, these observations apply to today's scenario with more force”.

Justice Kotwal noted that all offences, except offences laid down in Sections 26,27, and 32 were non-bailable as per the schedule of CrPC, 1973. The court further stated, “the amendment to Section 37 in the year 1989 and then in the year 2001 will not be affected by the concept of "small quantity".

The counsel cited the Baldev Singh case and said due to another amendment being carried out of Section 37 in 2001, the observations were not applicable.

Rejecting this contention, Justice Kotwal said, “This contention has no force. The Section itself has not undergone any change in its structure. Even in 1999, as the Act stood then, there was no specific sentence that "all the offences were non-bailable. This particular aspect was found to be significant by the learned Single Judge in Stefan Mueller's case (supra). It appears that Baldev Singh (supra) was not placed before the Hon'ble Courts when Stefen Mueller and Minnie Khadim's cases (supra) were decided. Hence, the observations of the Constitution Bench in Baldev Singh (supra) apply to the provisions of Section 37, as it stood then, and also to Section 37 as it stands today after the amendment in the year 2001".

Justice Kotwal concluded by saying that the NDPS Act needs to have a deterrent effect in today’s society so as to curb the spread of abuse from narcotics. Thus, strict punishment needs to be imposed.