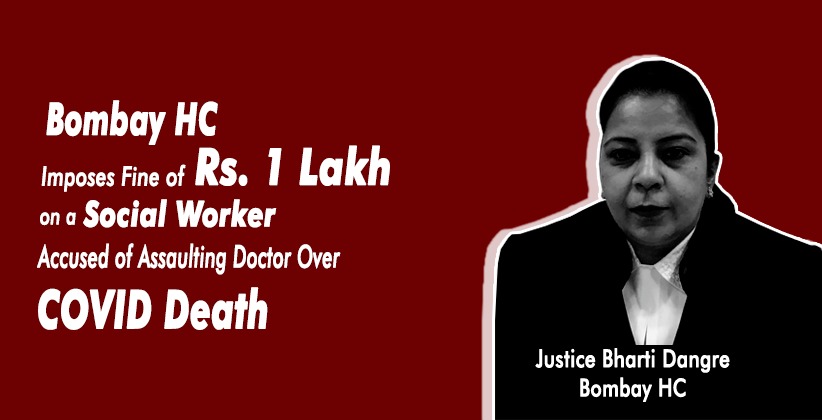 Recently, a hefty fine of Rs.1 lakh on a social worker who was accused of assaulting a doctor over COVID death was imposed by the Bombay High court.

Justice Bharti Dangre directed the accused/applicant to deposit the amount of Rs.1 lakh in the C.M. Relief Fund. On the failure of such a deposit, the accused would be deprived of protection from his arrest, the court added.

On 10th September 2020, the complainant (Dr. Sujit Adsul) lodges the complaint in this matter. Dr. Rahul Jadhav via telephonic conversation informed the complainant that one of the patients who is infected with COVID has died and relatives of this patient are creating commotion in front of the hospital.

It was alleged that one of the persons (applicant/accused) barged into the consulting room of Dr. Rahul Jadhav and abused the complainant. The accused/applicant also assaulted by fist and also abused staff of the hospital while asking about how does the patient died of COVID?

The court observed that “the sorrow and grief of the family members of a patient who was entrusted in the care of the hospital staff could very well be understood. It also cannot be forgotten that in the turbulent times of the COVID pandemic, it is the doctors and the nursing and health staff who have acted as corona warriors had been saviors for the infected persons.”

The court further added that,

“The incident is really unfortunate when the medical fraternity itself was subjected to an attack, verbal and physical at the instance of the applicant, though it can be very well understood that he lost his temper on account of the sudden demise of his near relative, at the same time, it can be very well discerned that the applicant had no intention and since he is remorseful of his action and perceives that he ought to have behaved in a responsible manner as his over anxiety did not yield any results.”

The court noted, “But he must be made accountable for his irresponsible act and particularly towards the health workers who are fighting the battle of Pandemic on the forefront.”

Since the applicant had no intention to commit any offense in a manner in which he was dealt with, the applicant required protection, the court observed. In the event of his arrest, the accused/applicant with a connection with FIR No.0463 of 2020 shall be released on bail on furnishing P.R bond to the extent of Rs.25000/- with one or two sureties.