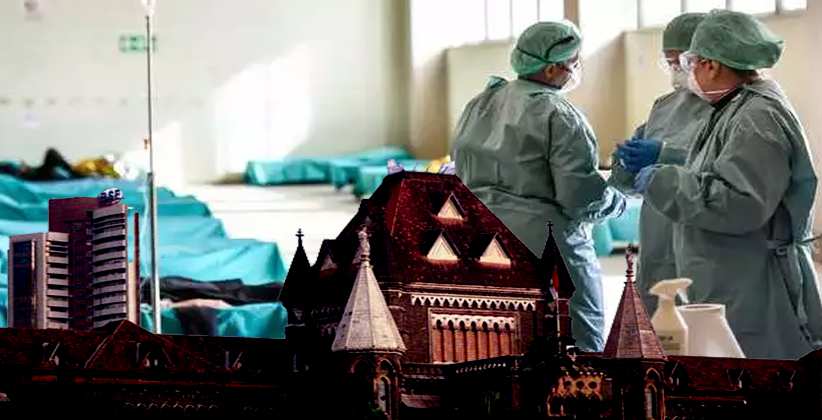 A Division Bench of Bombay HC Justice RV Ghuge and Justice SD Kulkarni was hearing a suo motu public interest litigation on the rising number of COVID patients in Aurangabad. In July, the court has warned public servants and officials who have their duties for fighting this pandemic are refraining to come to the duties. Court has also warned to give a surprise visit to the hospital to ensure that there is discipline amongst the concerned staff.

Here the complaints were about excessive rates is being charged by the hospital for COVID or non-COVID patients and also of the hospital’s obstinate attitude towards them. Bench called Prosecutor Kale to take action against these complaints, who informed the court that along with Divisional Commissioner of the Aurangabad few others have formed a team to solve these kinds of complaints.

Amicus curiae senior advocate Rajendra Deshmukh and Public prosecutor informed the court that though the COVID patients in Maharashtra have not decreased, but the administration in 13 districts has considerably succeeded in controlling the pandemic. To which court said, "The local administrations in all districts are putting in strenuous efforts and are working relentlessly even up to late hours in the night. They begin their activities in the early hours of the day and are leaving no stone unturned in their efforts to contain the spread of coronavirus".

Court had referred to a similar case  Jan Swasthya Abhiyan & Anr Vs State of Maharashtra & Ors., wherein Justice Datta directed the state to consider increasing budgetary allocation for public healthcare and observed citizens serve or perform Seva to others by staying indoors. The court observed that "It is possible that some employees may be acting negligently and may have indulged in dereliction of duties. It is equally possible that some employees may have faltered or lapses may be attributable to their conduct, which could be out of inadvertence. Each of such cases will have to be dealt with by the administration and appropriate action can be initiated by following the due procedure of law. At the same time, we deem it appropriate to record that the aggrieved patients or the kith and kin of the victims of callousness and negligence at the hands of the employees on Covid­-19 duties or hospitals, etc., would be at liberty to take recourse to a remedy as is permissible in law, notwithstanding the pending disciplinary action initiated by the employer of such employees."

The court said that it is encouraging to see the recovery rate of COVID positive patients in Maharashtra and noted that "We are given to understand that despite the dense population of this country, the death rate/ mortality in positive patients is one of the lowest in the world. Co­morbidities have also contributed to the cause of death in many cases. In this backdrop, it would be unfair on our part to keep the Damocles Sword of initiating criminal action and registering of criminal offenses, hanging on the administration and COVID-­19 employees. We have no doubt that the district administration is working hard. However, black sheep are found in all walks of life and in all spheres. It is mostly such work shirkers and indiscipline employees, who give a set back to the spirit and momentum of hardworking employees and give a bad name to the system."

Court went on to state that the general public has come to know about the situation through print media or electronic media, which develops the impression that local authorities have failed. Court mentioned that media being the 4th pillar of the democracy, it has an enormous capacity to showcase the efforts of the administration and also talked about its shortcomings, "However, good efforts put in by the administration should not be criticized merely for the sake of public consumption. Unnecessary or unwarranted criticism has its own pitfalls. It could cause irreparable damage and would dampen the spirit of the covid­19 warriors. We are aware that the Constitutional Court is to ensure that the fundamental rights of the citizens guaranteed under the Constitution of India, have to be protected. The Constitutional Court should neither be shy of nor find itself powerless in upholding the fundamental rights of the citizens as guaranteed under Article 21."

Finally, the Court directed the district collectors in all districts to establish a task force and to take action against the hospitals leveling excessive charges on both COVID and non-COVID patients. The court dismissed the PIL and while appreciating the district administration the court said, "At the same time, we expect the State and the administration to deal with willful and intentional acts of negligence, callousness and work shirking, with a strict hand and initiate appropriate action against such errant employees/officers."