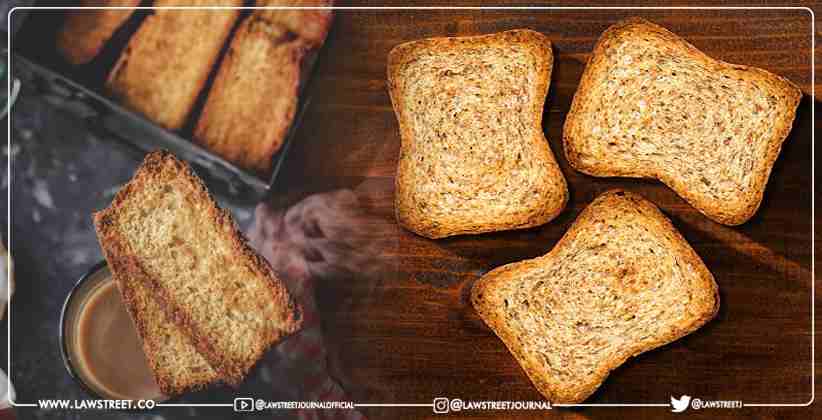 The Meghalaya High Court bench of Chief Justice Sanjib Banerjee and Justice W. Diengdoh has declared that rusk is not bread and that the state of Meghalaya's VAT exemption for bread must be granted to rusk as well.

The petitioner manufactures a product that is generically known as rusk. Rusk is a form of toasted bread that, unlike untoasted bread which is soft, is crunchy and it is consumed more as a biscuit than as bread or even toasted bread. Bread is exempted from value added tax in the State. The petitioner passed off its product as a form of bread and took advantage of the exemption. Upon the Department regarding rusk as different from bread and seeking to impose VAT under the miscellaneous entry which pertains to unspecified products, the petitioner challenged the same. At the end of the adjudication at three levels before the Department and the Board of Revenue, the petitioner failed to impress the authorities that rusk had to be treated as bread and permitted the exemption. Hence, the present revision.

whether the product rusk was liable to be treated as bread and extended the benefit of exemption from VAT that bread enjoys in the State.

At first blush, the argument put forth by the petitioner appears to be attractive; after all, it is nobody’s case that the petitioner buys bread from the market and manufactures rusk therefrom.

As per the submission of the petitioner rusk , is also a form of bread as it is in the nature of toasted bread .

“The petitioner further begs to state that the item „Rusk‟ is nothing but a form of bread and is in the nature of toasted bread and there is no manufacturing process that can be said to have taken place making the item „rusk‟ as separate from „bread‟. „Rusk‟ is a form of bread which can last longer as its moisture content is reduced by toasting the sliced bread to a given specification. After the preparation of bread is completed, the process of its conversion into rusk begins by slicing the bread into small pieces which are then dried/toasted in an oven to form „rusk‟ so that the moisture of the bread comes down to a given specification. For the purpose of preparing „rusk‟, neither any ingredients are added to bread nor, the chemical composition of bread gets changed in any manner. Rusk is prepared by simply drying/toasting the bread and therefore, by no stretch of imagination „rusk‟ can be treated as anything other than „bread‟.

Furthermore ,  the petitioning-assessee, reliance has been placed on the landmark judgments mentioned below :

In the case of Kayani and Co. v. Commissioner of Sales Tax and (1978)[1] the question that fell for determination was “whether double roti, shirmal, parata and chapathi etc.”, can be called bread for the purpose of attracting sales tax thereon.

The Hon’ble High Court said that in Kayani and Co., the Supreme Court refused to presume that the legislature had intended the word „bread‟ to imply the article of food going by that description in European countries and held that roti, shirmal, parata and chapathi and the like in this country had to be seen to be included within the meaning of the word „bread‟ in the relevant entry.

On the other hand the , state placed reliance on different cases firstly in the case of Mamta Surgical Cotton Industries v. Assistant Commissioner (Anti-Evasion) [3] in which the court held that, the issue was whether ordinary cotton and surgical cotton could be regarded to be the same for the purpose of sales tax or VAT. Also in the landmark case of Vasantham Foundry v. Union of India [4] the question that arose was whether cast iron in the list of declared goods in the relevant statute would include cast iron casting.

The Hon’ble Court said that the final products were not cast iron but the cast iron produced by the assessee was subjected to a further process of manufacture to be converted into pipes or manhole covers or bends.

After hearing the contentions of both the  sides the Hon’ble Court observed that by  applying the common parlance test in this case, the question that arises is whether a person desirous of buying bread would ask for rusk or whether a person who goes to a shop and asks for rusk would be given bread in its place. The answer is obvious: bread is bread and rusk is rusk and never may the twain be equated.

Accordingly, there is no flaw found in the appellate judgment and order under revision and no ground seen for interfering therewith. [5]

Citation:  Case No.: CRP No.32/2019 with MC (CRP) No
Counsel For Petitioner: Senior Advocate A Saraf