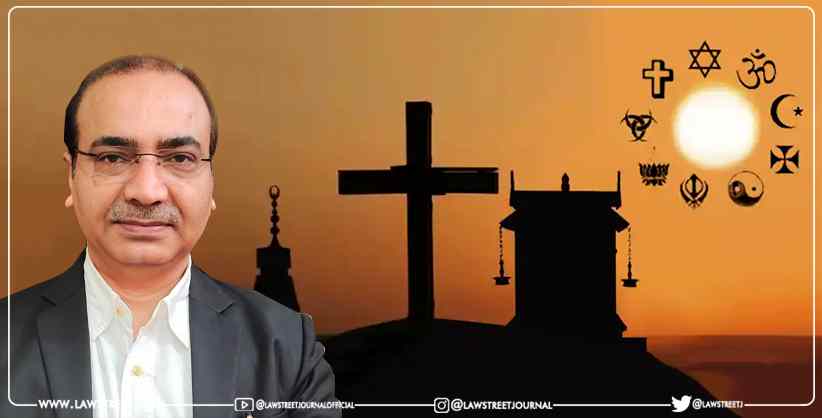 In the Delhi High Court, a Public Interest Litigation (PIL) has been filed by BJP leader and advocate Ashwini Kumar Upadhyay seeking an appropriate writ order or direction to the Centre and Delhi Government to prohibit religious conversion by intimidating, threatening, and deceivingly luring through gifts and monetary benefits and by using black magic and superstition.

Adv. Upadhyay filed this plea to take appropriate steps to control religious conversion in the spirit of the observations made by the Hon'ble Supreme Court of India. The plea mentions the famous Sarla Mudgal Case (1995) and the Rev. Stainislaus Case (1977).

The petition submits that religious conversion by “the carrot and the stick” and “by hook or crook” not only offends Articles 14, 15, 21, 25, but also against the principles of secularism, which is an integral part of the basic structure of the Constitution. Petitioner submits with dismay that Centre and Delhi Government have failed to control menace of black magic superstition & deceitful religious conversion, though it’s their duty under Article 51A.

The submissions of the PIL are as follows:

2.      Article 14 ensures equality before law and secures equal protection of laws. Presently, religious conversion by intimidating, threatening and deceivingly luring through gifts and monetary benefits is an offence in Ghaziabad but not in adjoining East Delhi. Similarly, religious conversion by using black magic and superstition is an offence in Gurugram but not in adjoining West Delhi. It not only violates Articles 14 but is also contrary to principles of secularism and rule of law, which are basic structure of the Constitution.

3.      Women & Children are the main target of foreign funded conversion mafias but Centre and Delhi Government has not taken appropriate steps to control the religious conversion by ‘the carrot and the stick’ in spirit of Article 15(3). Hence, the Hon’ble Court may intervene.

4.     Religious conversion by ‘the hook and crook’ directly offends the right to life liberty dignity, guaranteed under Article 21 of the Constitution.

5.      Right to religion guaranteed under Article 25 is not an absolute right but subject to public order, health and morality. Religious conversion by using miracles, superstition and black magic is not protected under Article 25. Many foreign funded individuals and NGOs are converting EWS-BPL citizens to foreign religions by intimidating, threatening, deceivingly luring through gifts and monetary benefits.

8.     Article 51A: Centre and State has to: abide by the Constitution and respect its ideals and institutions; uphold and protect unity and integrity of India; promote harmony and spirit of brotherhood; renounce practices derogatory to dignity of women; value and preserve rich heritage of our composite culture; develop scientific temper, humanism and spirit of inquiry and reform; and strive towards excellence in all individual and collective activities; but Centre and State is not taking steps in spirit of Article 51A.

9.     Article 18 of International Covenant on Civil-Political Rights: Article 18(2) inter-alia states: “No one shall be subject to coercion which would impair his freedom to have or to adopt a religion or belief of his choice.” Article 18(3) states: “Freedom to manifest one’s religion or beliefs may be subject only to such limitations as are prescribed by law and are necessary to protect public safety, order, health, or morals or the fundamental rights and freedom of others.”

10.  The 1981 Declaration on the Elimination of All Forms of Intolerance and Discrimination based on Religion or Belief: Article 1(2) states: “No one shall be subject to coercion which would impair his freedom to have a religion or belief of his choice.” It carries a significant influence as it is entirely devoted to religious freedom.

14.  Unethical predatory conversion strategies are commonly used. One method is material enticement in which humanitarian aid or economic, educational, medical or social assistance is offered on the condition that the person converts. Another is the denigration of the person's religion to make a new religion appear superior. A third unethical, predatory method is the promotion of ‘bigotry’ i.e. knowingly and intentionally promoting religious hatred & violence. Predatory proselytization tears apart the fabric of the communities where it occurs and has led to the annihilation of cultures.

15.   The Law Commission of India in Report No-235 (Conversion and reconversion to another religion) after considering several judgments of the Supreme Court and of different High Courts observed that for converting into Hinduism no specific ceremony or documentary evidence is required. After considering all the relevant laws, provisions of the Constitution and the ground reality, there is a need to frame strict laws against conversions by use of force, fraud, allurement, charity or by any other means and such persons must be dealt with strict penal provisions and religious identity and sanctity of the indigenous people of India must be protected and restored.

16.  Chapter-XV of the Indian Penal Code deals with offences relating to religion. Therefore, religious conversion by “the carrot and the stick” and by “Hook and Crook” can be prohibited by inserting Section 296A and 298A. Likewise, Section 375A, 409A and 493A can be inserted in IPC to prohibit religious conversion by intimidating, threatening and deceivingly luring through gifts and monetary benefits and by using black magic and superstition. There is massive foreign funding through FCRA and Money Laundering to convert followers of Indian religion. But the Centre has not amended the FCRA and Money Laundering Act. Hence, the petitioner is filing PIL.