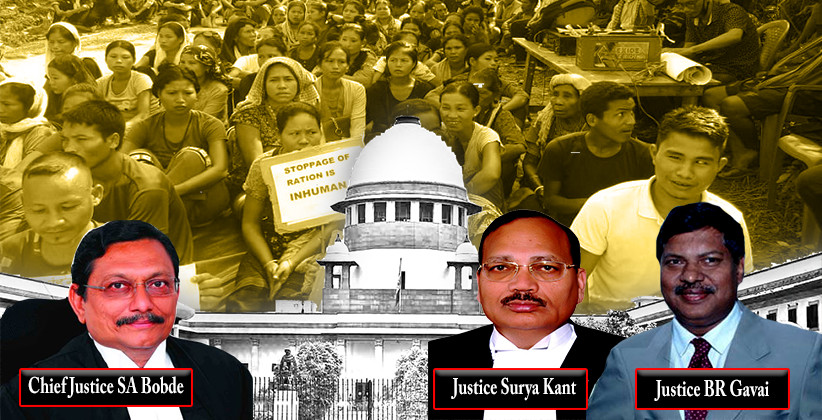 The Supreme Court on Monday (December 9, 2019) had asked the Central government to file a reply within 2 weeks’ time from the date of the order, to inform the court as to why the supply of ration has stopped, to the Bru Community living in the relief camps of Tripura.

The petition recorded that the Government of India had stopped the supply of ration to the Bru Community from October 1, 2019 without giving any reason for the same. The Bru Community originally belongs to Mizoram and is a scheduled tribe which has been living in these relief camps for more than 20 years now. It was solely dependent on the Government for whatever meagre ration and cash doles they provided.

Defying the Apex Court’s previous direction in the matter to maintain status quo, the Government of India had also declared that the relief camps would be uprooted on November 30, 2019. In the light of these circumstances, 6 people in the Bru relief camps have died of starvation, as reported on November 4, 2019. The petition states that numerous peaceful protests were held in the community to urge the Government of India and the Government of the State of Tripura to release the ration for the people of the camp following which, the State of Tripura agreed to release ration but only till November 30, 2019. The State again declared that after the end of the stipulated period, the camps would be removed.

Instead of coming to the rescue of the people of the Bru Community, the Centre was reported to have been sending reminders to the State of Tripura to shut down the camps. The petition further stated that, “there is widespread fear among the people at the relief camps that food supply would yet again be suspended resulting into further deaths and people would be forcefully bundled into the standby vehicles and transported to Mizoram. It is in these circumstances that the petitioner has approached this Hon’ble Court.”

The petition also prayed that a Special Investigation Team be set up to look into the matter of the 6 starvation deaths that have occurred till now and the local police station be directed to register FIRs in these matters. A prayer was also made to provide compensation of Rs. 1 crore per victim to the families of the deceased persons.