Home Judiciary Calcutta High Court on Babul Supriyo remark against Mahua Moitra: "Prima Facie Humiliated the Dignity and Honor of a Women, Later Cannot Take the Defense of Freedom of Speech and Expression Under Article 19(1)(a) Constitution of India, 1950" [READ JUDGMENT]
Judiciary 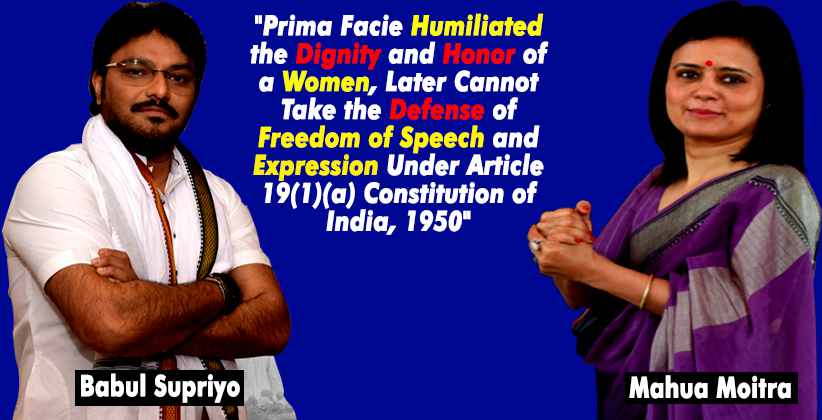 The Calcutta High Court has quashed the criminal proceeding against BJP MP and Union Minister Babul Supriyo in the criminal defamation case by TMC politician Mahua Moitra. The criminal proceeding was quashed on the technical ground that police could not have registered the FIR for the offence under Section 499 / 500 of Indian penal Code, 1860 as the offence is a non-cognizable offence. In the meanwhile, the High Court took exceptions to the remark of Babul Supriyo and observed that his utterance against Mahua Moitra was defamatory within the meaning of Section 499 Indian Penal Code, 1860. Section 500 Indian Penal Code, 1860 provides punishment for defamation is simple imprisonment for a term which may extend to 2years or fine or with both.

The subject matter of the case was that the comment made by Babul Supriyo against Mahua Moitra (then an MLA in West Bengal Assembly) in a national debate organizer by NDTV 24×7 on January 3, 2017. The comment was derogatory eluding of the intoxicating liquor called Mahua which is drunk in many tribal areas in India. Babul Supriyo made this remark at the flag end of the program.

A single bench of Justice Bibek Chaudhari, prima facie, observed that such comments humiliated the dignity and honor of a woman. The bench also said the Supriyo violated his constitutional oath as an MP since it is a constitutional mandate to protect the dignity of women.

" It is the Constitutional mandates under Fundamental Right, Fundamental Duties and Directive Principles of State Policy that dignity of women must be protected and freedom of speech and expression enshrined in Article 19(1)(a) are subject to reasonable restriction and one of such restrictions and one of such restrictions is a penal provision against defamation. The petitioner, it is already stated, at the relevant point of time was a Member of Parliament. He took a solemn oath to bear faith and allegiance to the Constitution. By making such a defamatory statement to women, the petitioner prima facie, not only humiliated dignity and honor of a woman but also violated his constitutional oath".

The court ordered that an imputation that the present MP from Krishnanagar was intoxicated was defamatory. The Court advised, "it is expected from a representative of the people that he must be courteous in his behavior dignified in his manner and caution on his words spoken by him".

The Court however quashed the criminal proceeding on the basis of charge sheet submitted by the police on the ground that the Court can take cognizance for the offense of criminal defamation only on a written complaint by the aggrieved person. "...cognizance of an offence punishable under Section 500 of Indian Penal Code,1860 cannot be taken in the absence of the complaint in writing specifically filed by the complainant before the magistrate on the basis of police report only which is barred under Section 199 of Code of Criminal Procedure 1973". Under Section 199 Code of Criminal Procedure, 1973 enumerates that no court shall take cognizance of an offence punishable under Chapter XXI (Of Defamation) Indian Penal Code, 1860 except upon a complaint made by some person aggrieved by the offence.

The Court while allowing Babul Supriyo’s petition, the Court clarifies that Mahua Moitra was at liberty to take appropriate actions with respect to the objectionable remarks in accordance with the law.