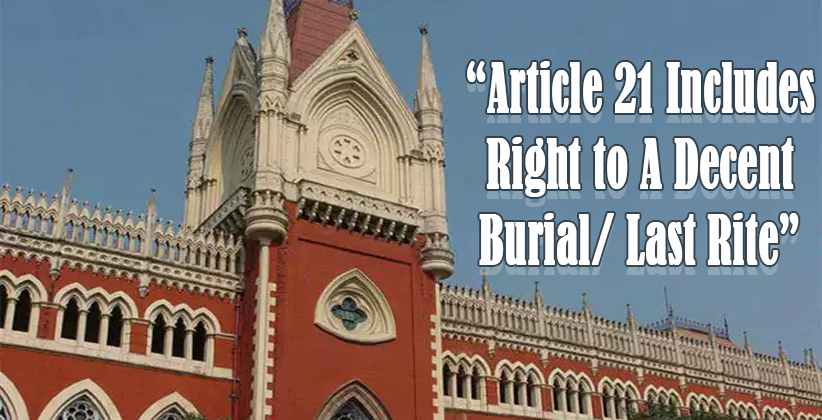 A Public Interest Litigation (PIL) has been filed under Article 226 of the Constitution in the Calcutta High Court, on June 06, 2020, seeking to direct the authorities to hand over the dead bodies of persons who have died on account of COVID-19 to the family members for burial/cremation.

“the word and expression 'person' in Article 21, would include a dead person in a limited sense and that his rights to his life which includes his right to live with human dignity, to have an extended meaning to treat his dead body with respect, which he would have deserved, had he been alive subject to his tradition, culture and the religion, which he professed. The State must respect a dead person by allowing the body of that dead person to be treated with dignity and unless it is required for the purposes of establishing a crime, to ascertain the cause of death and be subjected to post-mortem or for any scientific investigation, medical education or to save the life of another person in accordance with the law, the preservation of the dead body and its disposal in accordance with human dignity.”

The petitioner submitted that guidelines similar to that of the Ministry of Health and Family Welfare guidelines on Dead Body Management issued on March 15, 2020, and that of the World Health Organisation (WHO)guidelines on Infection Prevention and Control for the Safe Management of a dead body in the context of COVID-19 issued on March 24, 2020, has been issued by the State of West Bengal but it has only remained on paper and not being practically followed on the ground.

Regarding the process currently being followed by the State of West Bengal, he submitted that, as soon as the COVID-19 patient dies, the hospital packs the body in plastic sheets and calls the health department and a dead body is not shown to the family. The health department takes the body away to a place called “DHAPA” in Kolkata which is barricaded by the Police having no public access. Not a single family member is allowed to see the dead body. After about 2 / 3 days of a death, the family member can collect the Cremation Certificate from a place called “Peace Haven” in Kolkata. None of the family members even get to see the body or the face of the deceased as if “he or she disappeared like a ghost into nowhere.”

The petitioner also drew the attention of the Court to the ruling of the Division Bench of the Bombay High Court comprising Chief Justice Dipankar Datta and Justice SS Shine, which had declared that there was no scientific proof to show that dead bodies spread the infection.

The Petition further mentions The Madras High Court ruling which had taken Suo Moto notice of death of one DR. Simon’s case and the division bench comprising of Justices M Sathyanarayanan and M Nirmal Kumar had noted:

“It prima facie appears that as a consequence of the above said alleged acts, a person who practiced a noble profession as a doctor, and breathed his last, has been deprived of his right to have a burial in a cemetery earmarked for that purpose”

One of the glaring issues that the petitioner mentioned was that lot of patients who might have had a minor ailment or history of any other disease which was never life-threatening and when such people became COVID-19 positive, the patients were declared to be not deceased because of COVID-19 and the death certificate mentions the reason for death as Comorbidity with the primary reason for death as something else and still the dead body not handed over to the family members. This could again lead to the under-reporting of the actual number of cases or deaths due to COVID-19. He also argued that when all the states are maintaining transparency, the Govt of West Bengal may be directed to publish a district-wise list with names of all the persons with regard to whom the numbers are being declared on their official websites as this would help the Govt track each case thereby helping it to monitor and control the spreading disease.