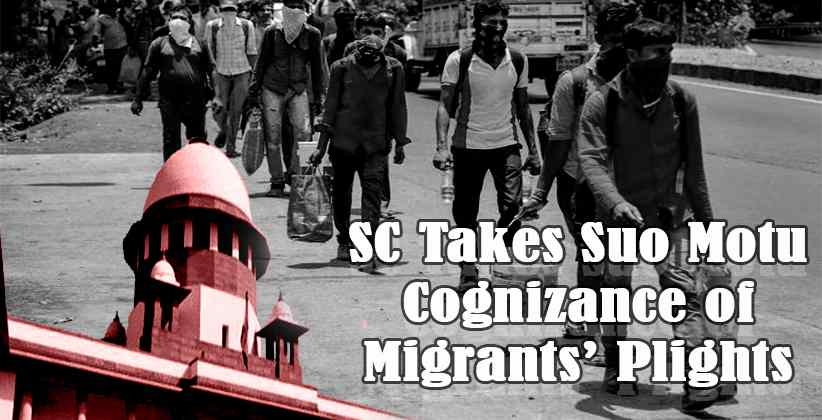 On May 26, 2020, the Supreme Court Bench of Justices Ashok Bhushan, Sanjay Kishan Kaul and M.R. Shah took suo motu cognizance of the hardships and miseries faced by migrant workers stranded in the country during this COVID-19 pandemic and directed the Central and State Governments to provide adequate transport arrangement, food, and shelters immediately free of costs.

The Bench noted as follows:

“The newspaper reports and the media reports have been continuously showing the unfortunate and miserable conditions of migrant laborers walking on-foot and cycles from long distances. They have also been complaining of not being provided food and water by the administration at places where they were stranded or in the way i.e. highways from which they proceeded on-foot cycles, or other modes of transport. In the present situation of lockdown in the entire country, this section of the society needs to succor and help by the concerned Governments especially steps need to be taken by the Government of India, State Governments/Union Territories in this difficult situation to extend helping hand to these migrant laborers.”

In addition to media reports, the Bench also noted that the Court also has received several letters and representations from different sections of society highlighting the problem of migrant laborers. The bench also stated that the crises of migrant laborers is not coming to an end and even continuing today with large sections still stranded on roads, highways, railway stations, and State borders.

The bench further remarked that it was aware of the measures taken by the Government of India and the State Governments but found inadequacies and certain lapses.

In concluding it’s stand; the bench has asked the Union of India and all States / Union Territories to submit their responses looking into the urgency of the situation. The matter will be taken up again on May 28, 2020, wherein Solicitor General has been asked to assist the Court.