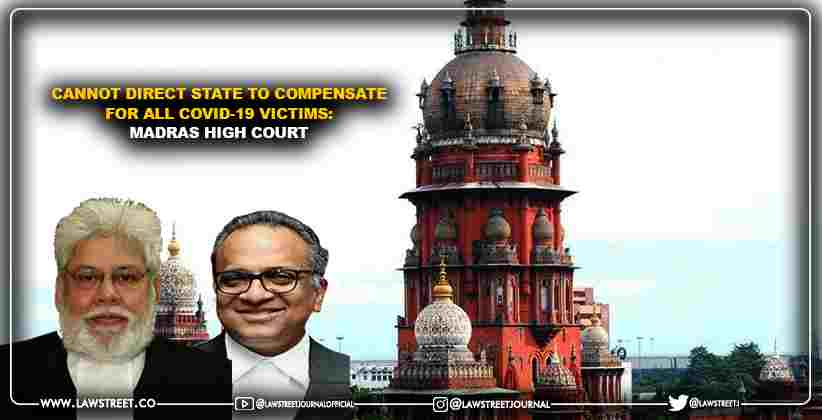 The Madras High Court on Tuesday (June 8, 2021) pointed out that the Court could not issue a writ of mandamus directing all Covid victims to be compensated, irrespective of the financial position that the families may be in.

These directions came in a petition seeking a writ of mandamus directing the state to compensate the kith and kin of those who succumbed to Covid. [R. Boomiraj v. Government of Tamil Nadu.

The Bench of Chief Justice Sanjib Banerjee and Justice Senthilkumar Ramamoorthy stated that the issue raised in this plea was a matter of pure policy that the executive must decide on and that the Court can scarcely interfere therein.

“It has become a habit in this Court to invoke the extraordinary jurisdiction under Article 226 of the Constitution by way of public interest litigation, sometimes for self-publicity, to seek extraordinary orders that the judiciary may just not be competent to pass,” the Court said.

The functioning of democracy depends upon the strength and independence of each of its organs and hence legislature, executive, and judiciary must function within their own sphere demarcated under the Constitution and no organ can usurp the functions assigned to another.

While pointing out that several schemes have been introduced at the Center and State level that provides relief to certain classes of people, the Court stated that such issues are a matter of policy that are best left to be decided by the executive. After all, the State Administration cannot function with its hands tied by the judiciary behind its back.

“The Court cannot issue a mandamus directing all Covid victims to be compensated, irrespective of the financial position that the families may be in. It is a pure executive action that has to be taken on the basis of the policy of the government of the day and the data that it gathers in such regard,” the order read.

The Bench heard another matter which sought compensation for dependents or heirs of deceased advocates, particularly those who were victims of Covid-19. [J. Brezhnev v. The State of Tamil Nadu]

The plea also requests the Court to direct the State to set appropriate guidelines for including advocates and their family members under the ‘Tamil Nadu Chief Minister's Comprehensive Health Insurance Scheme’ considering them as Frontline workers.

The Court disposed of the matter by stating that the Court cannot issue a writ of mandamus to the State as it is for the State to take a considered decision in such regard in accordance with the law.

“It is a matter of policy for the State to decide whether to give compensation to a class of persons and what extent. There are no doubt diverse classes of people will be seeking compensation and it is a matter within the exclusive domain of the State. The Court cannot pick and choose advocates for preferential treatment because most functionaries in this field are advocates,”  it added.