Home Judiciary Complaint U/S 498A IPC Need Not Be Filed By Woman Subjected To Cruelty Herself: SC [Read Judgment]
Judiciary

Complaint U/S 498A IPC Need Not Be Filed By Woman Subjected To Cruelty Herself: SC [Read Judgment] 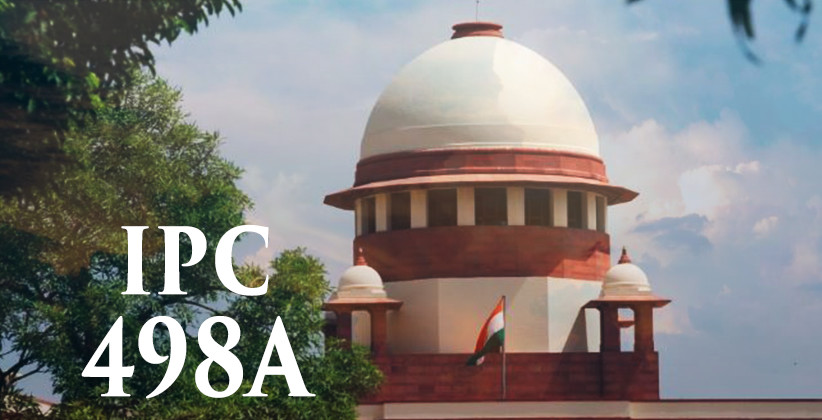 The Supreme Court on April 30, 2019, in the case of Rashmi Chopra v. State of UP, has held that a complaint under Section 498A of the Indian Penal Code, 1860, need not necessarily be filed by the woman who is subjected to cruelty by her husband or his relatives.

A Bench comprising of Justice Ashok Bhushan and Justice K.M. Joseph was hearing an appeal against the order passed by the Allahabad High Court wherein the High Court had refused to quash the summons issued by the Magistrate in the complaint against husband and his relatives. The complaint was filed by the father of the victim under Section 498A and Section 3/4 of the Dowry Prohibition Act, 1961. The complaint also alleges other IPC offences.

The appellants submitted before the court that the complaint is not maintainable since it is not made by the woman, but filed by her father.

However, the Bench, referring to Section 498A IPC, rejected the submission and observed that "There is nothing in Section 498A, which may indicate that when a woman is subjected to cruelty, a complaint has to be filed necessarily by the women so subjected. A perusal of Section 498A, as extracted above, indicates that the provision does not contemplate that complaint for offence under Section 498A should be filed only by women, who is subjected to cruelty by husband or his relative. We, thus, are of the view that complaint filed by respondent No.2, the father of Vanshika cannot be said to be not maintainable on this ground."

In the complaint filed by the father, he had alleged that the husband of his daughter started harassing her by "demanding additional dowry of one crore". The court observed that “There being no specific allegation regarding any one of the applicants except common general allegation against everyone…..clearly indicate that application under Section 156(3) Cr.P.C. was filed with a view to harass the applicants.”

Taking into consideration the observations made, the court quashed the complaint as well as summoning order insofar as offence under Section 498A IPC and Section 3/4 of Dowry Prohibition Act. However, the court said that the complaint shall proceed insofar as offence under Sections 323, 504 and 506 of IPC against husband and two other persons. The summoning order to that extent only was upheld.