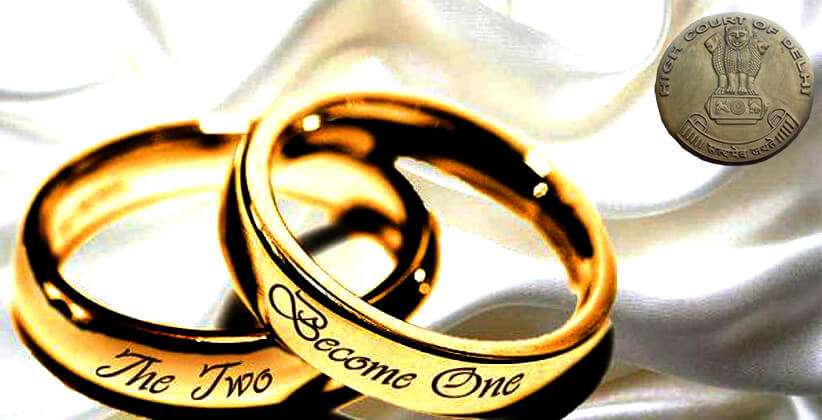 The Delhi High Court on July 8, 2019, has held that court cannot pass a decree of divorce only on account of irretrievable breakdown of marriage, it can only be considered as a circumstance by the court if it is merged with cruelty.

The Bench comprising of Justices G.S Sistani and Jyoti Singh was hearing an appeal challenging a decree of divorce, passed by the Family Court in a petition filed by the respondent/husband under Section 13(1)(ia) of the Hindu Marriage Act, 1955.

In this case, the appellant/wife and the respondent/husband had married as per Hindu rites in August, 1989 and out of their wedlock two sons had been born a few years later. Since 2008, they had been living separately. Due to disputes and differences between them, the husband had filed the said petition before the Family Court seeking dissolution of marriage by a decree of divorce on the ground of 'cruelty'.

The respondent before the Family Court had pleaded that since the very beginning, the appellant had not been inclined to live in the matrimonial home with his family and even after living separately from his other family members, the appellant had persisted in her behavior and had even ridiculed him due to his low educational qualifications. Moreover, it was further alleged by the respondent that the appellant never used to do the household work and picked up quarrels whenever asked to do the same.

He also alleged that the appellant used to beat him up with the help of her brother to pressurize him into transferring his property. Suffering from depression, he had thus filed the divorce petition.

On the other hand, the appellant had pleaded ill-treatment from her in-laws, being turned out of her matrimonial home, misappropriation of all her stridhan by her in-laws, physical abuse for insufficient dowry and lack of any financial support from her husband for running household expenses. She also alleged that she and her children had suffered from a constant state of tension, depression and trauma due to the violent temperament of her husband and that it was her brother who had taken care of her and her children for the last three years. She further alleged that the petition before the Family Court was a counterblast to her case against the respondent under the Domestic Violence Act, 2005.

The Family Court had examined the issues and had ruled in favour of the respondent observing that he was being deprived of any emotional or household support from the appellant/wife and his non-contribution to household expenses could be justified due to his meager salary.

On the issue of cruelty, relying upon the cross-examination of the appellant where she had alleged the respondent's extramarital affair with his sister-in-law, the Court had concluded that allegations of such sort constituted mental cruelty. Moreover the Family Court observing that the marriage was dead for all purposes since they had been living separately, ordered it to be dissolved, for it would have been a 'travesty of justice' to let it continue since the respondent would only receive ridicule due to his low educational status from the appellant, in the event of its continuation. In doing so, the court had relied upon a number of cases, where the concept of cruelty was blended with an irretrievable breakdown of marriage to a pass decree of divorce.

The Bench observed non-fulfillment of duties had been claimed by both sides but although the issue of cruelty had been examined before the Family Court, the respondent had failed to prove any of his allegations against the appellant due to which the decree of divorce could not be sustained.

Furthermore, the Family Court judgment was also questioned, since no reason had been provided by it to show how the acts of the appellant had amounted to cruelty.

“Having perused the written statement and the cross-examination we are in agreement with the learned counsel for the appellant that the Family Court has erred in holding that the appellant had admitted to having made an allegation of extra-marital affair of her husband with his bhabhi. The cross-examination and the written statement do not support this observation of the Family Court. Thus, taking this as an admission and making this as a ground of mental cruelty so as to dissolve the marriage between the parties, in our view, is erroneous,” the court said.

The Bench further held that allegations of not cooking food, not paying bills, for business loss, difference in educational status were "normal wear and tear" of an ordinary married life.

Thus the court allowed the appeal and set aside the order passed by the Family Court.