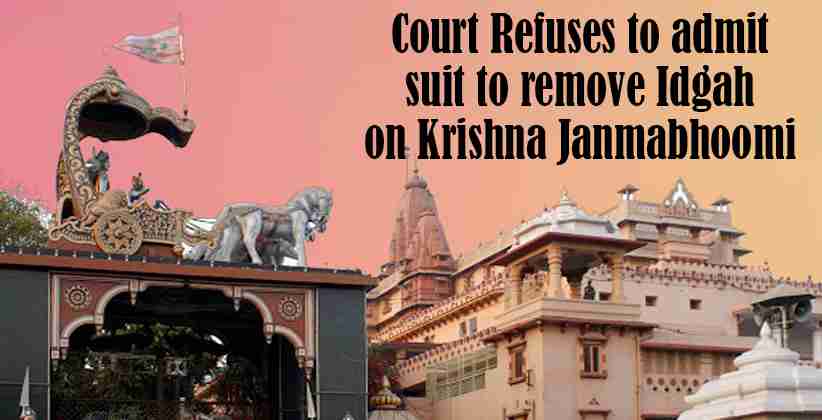 The Mathura Civil Court refused to admit the following suit to remove an Idgah, which is built on the day of Krishna Janmabhomi on Wednesday (30th September 2020). The suit was filed by Advocate Vishnu Jain and was dismissed by the Judge of the Civil Court.

The lawyer had cited, Places of Worship (Special Provisions) Act, 1991. But the act was only limited to the exemption of the ownership of the already disputed Ram Janmabhoomi-Babri Masjid land which is in Ayodhya but this also had barred the courts from entertaining any form of litigation that would, tamper with the status quo of the religious structure which existed as of August 15, 1947.

The suit also went on the matters of facts and history about Aurangzeb and his ruling period and his staunch following of Islamism. The war between Hindu and Muslims and the references of history was all mentioned thereafter.

The suit also had stated the removal of encroachment and superstructure, which is currently being maintained by the committee of trust masjid Idgah and this was done with the consent of the Sunni Central Board as well. The suit finally was submitted with the sayings that the plaintiff does have the right under Article 26 of the Constitution of India and has the power to regain, hold and manage any sort of property which is belonging to, owned, or which is possessed by the God Shri Krishna Virajmann, which had the measurements of 13/37 acres and is situated within the area complex of the temple in Katra Keshav Dev, which is the city district in Mathura. In the conclusion of the judgment, the Place of Worship (Special Provisions) Act was stated and was said that the religious character of the place of worship shall still continue to the be the same as of August 15, 1947.

The act also gave the power to declare all suits, petitions, or any sort of proceedings which were in regards to converting the character or status of the place of worship, which are currently pending before any court of law would be abated as soon as the law will be back in force.