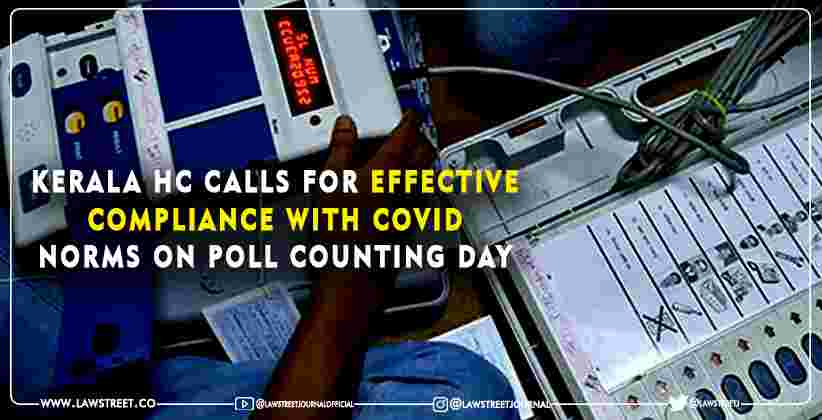 In a strongly worded order, the Kerala High Court directed the Election commission of India, District Collectors  (District Electoral Officers), and Commissioners /Superintendents of Police to ensure effective compliance with COVID protocols on the day votes in Kerala Assembly Elections are counted.

"We are certain that the Election commission of India's and the Governments directives cannot be based solely on paper, as they appeared to be when the Election  campaigns were completed. This court cannot, therefore, afford to leave anything to chance at a time when our state is on the verge of Collapse "

The observations came in response to a writ petition filed by a lawyer Dr KP Pradeep, who appeared in person in his case. His Petition asked for a declaration that all types of public and social gathering, processions, or parades of any kind  held inthe name of election-oriented or organizational activities by political parties are unconstitutional a d illegal when COVID-19  Protocols are in effect.

Declaring that the averments presented a compelling public cause, the Court ordered that all directives issued by the State Government and Election Commission should be strictly followed.

State Attorney K V Sohan stated that the state was fully aware of the situation and that the Election Commission's directives from August last year, as well as its recent order dated April 27, and Government Order dated April 26, would be strictly followed.

The Bench stated that the social distancing protocols are at a "acme" in light of the steep rise in cases.

Primarily, we cannot consider this writ petition adversarial, because the averments, in their inherent nature and tenor, present a compelling public cause... The pandemic statistics are climbing by the day, reminding us all to act responsibly and with extreme caution. The'social distancing' protocols are paramount and must be enforced effectively and unequivocally, regardless of the circumstances.

As a result, the Court called for strict prevention, calling it "the need of the hour." The Bench emphasized the importance of preventing gatherings over initiating punitive action following infractions."

Taking the State Attorney's submissions into consideration, the Court directed the respondents to take "effective and requisite steps" to "ensure that no social or political assemblages, meetings, gatherings, processions, or parades of any kind - be that celebratory, cheering, or otherwise - in violation of the COVID-19 protocols" took place.

The Bench also urged the respondents to ensure that there were no violations of the directives issued by the Election Commission of India.... and the mandate of the Government Order anywhere in the State of Kerala - including counting stations or political party offices/establishments - between May 1 and May 4.

The Court also demanded "immediate and unreserved action to avert, avoid, and prevent any violation of these orders under the applicable laws, including the Epidemic Diseases Act and the Disaster Management Act."

With these directives, the Court ordered that the case be heard on May 4 to ensure compliance.

Earlier this week, the Justices Ashok Menon and Murali Purshothaman of another High Court division Bench has  expressed satisfaction with the measures taken by the State Government and the Election Commission to prevent crowds and gatherings on May 2 , the day of counting votes.

"In this regard, we conclude that no specific order from this Court is required. The government is free to invoke the provisions of the Kerala Epidemic Diseases Ordinance, 2020 and take appropriate action against violators, and we are confident that the government will be diligent in enforcing the existing provisions," the Court said