Home Judiciary COVID Plea before Supreme Court seeks compensation for families of patients who died due to oxygen shortage, action against authorities
Judiciary 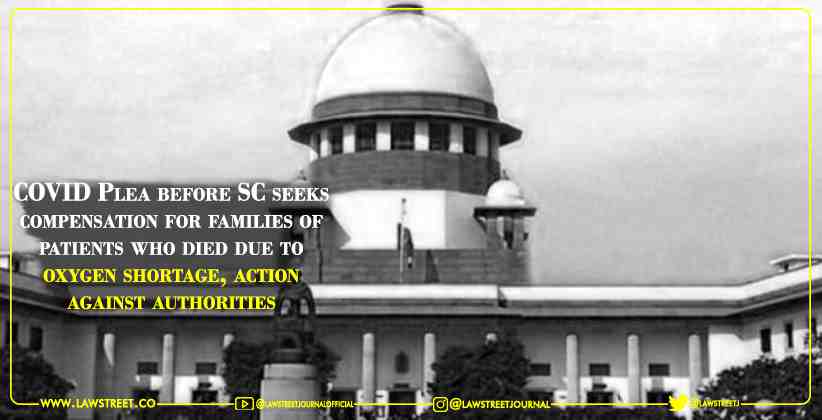 A PIL has been filed in the apex court which seeks compensation for families of COVID-19 affected patients who died due to oxygen shortage. it also seeks more rigid punishments for violation of COVID-19 protocols and as well as action against authorities for gross negligence.

The plea specifically prays for the submission of a National plan before the Apex Court which not only deals with the prevailing second wave, but also showcases whether any preparation has been put in place for tackling a possible third wave of the virus. It also demands the initiation of proceedings against the representatives and officials who have committed negligence, leading to the spread of the virus, hence leading to the deaths.

Lastly, the plea seeks immediate guidelines to be issued to the centre and states to provide financial and medical aid for the treatment of patients who got infected while attending Maha Kumbh Mela and those who got infected it from the election rallies.

The plea was drafted by Adv Nachiketa Vajpayee and Filed by Adv Sriram Parakkat on behalf of Social Activist Deepak Raj Singh.

“There has been a significant violation of article 47 by the respondents. They have also shown sheer mis-governance and have failed to discharge their various duties particularly under the Epidemic Diseases Act, 1897 and the Disaster Management Act 2005, while grossly violating the Right to Life and Personal Liberty of thousands of Indian Citizens, guaranteed under Article 21 of the Constitution of India.”

The plea stated Chapter V of the DM Act provides the Centre and State with duties and obligations in the case of a disaster.

The plea highlights that the Parliamentary Standing Committee on Health and Family Welfare had predicted the second wave and issue of inadequate oxygen supply along with government hospital beds, while asking the Centre to take immediate action for the same. The 123rd report of the Committee regarding this issue has been presented to the Chairman of the Rajya Sabha on November 21, 2020 and been sent to the Lok Sabha Speaker four days later.

The Centre had enough time to act on the same, states the plea.

The plea also suggests that the Centre and State should ensure free vaccination of all Indians, They should collaborate and develop schemes to provide free education to children up to 21 years of age, especially those who have lost their families/parents to COVID-19.