Home Judiciary "You Are Not a Doctor, Medical Student, or Scientist," SC while dismissing a petition for COVID treatment and tests
Judiciary

"You Are Not a Doctor, Medical Student, or Scientist," SC while dismissing a petition for COVID treatment and tests 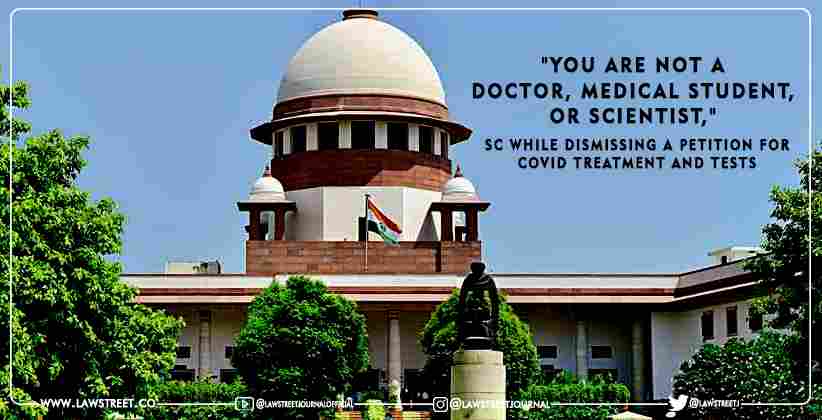 On Monday (April 26, 2021) the Supreme Court dismissed, with costs, a petition seeking directions on COVID tests and treatment. The Court also criticized the petitioner, a commerce graduate, for filing a petition despite having no knowledge of the subject.

A three-judge Bench led by CJI Ramana dismissed the petition as 'ridiculous' and imposed an Rs.1000 fine. The Court has ordered him to pay the legal fees owed to the Legal Services Authority of the Calcutta High Court and to submit a report to the Supreme Court.

The Bench observed, "This is a ridiculous plea filed by a petitioner who has no knowledge of the subject. He admitted that he is a commerce graduate. The Petitioner wants us to tell him what kind of tests and treatment he needs to get for COVID. We'll levy a fee." The Bench initially stated that it would impose a cost of Rs 1 lakh for such a 'ridiculous writ petition,' but after the petitioner stated that he only had Rs. 1000, the Court decided to impose a cost of Rs 1000.

During the hearing, the Court asked the petitioner in person, Suresh Shaw, if he was a doctor and what knowledge he had of COVID. The petitioner informed the court that he was not a doctor and that his statement was based on scientific papers rather than his own knowledge.

The CJI remarked, "You're not a doctor, a medical student, or a scientist. How much do you know COVID?" In response to the Court's questioning about his educational background, the petitioner in person informed the Court that he has a master's degree in commerce.

The CJI remarked, "You want to prescribe COVID medications to everyone on the planet? Will a business graduate teach doctors and medical professionals all over the world how to treat COVID? How much penalty can we levy for filing a frivolous plea and wasting time? We'll charge a fee of ten lakhs for this."

At this point, the petitioner informed the Court that he is unemployed to which the CJI said, "So you're running a business? Filing a ridiculous writ petition. What’s your knowledge in science? You want to talk about COVID-19 virus and not being satisfied by the Calcutta High Court’s decision, you came here all the way just because it is online and free of cost, you can say whatever you want?”

The petition was eventually dismissed with cost, as stated above.