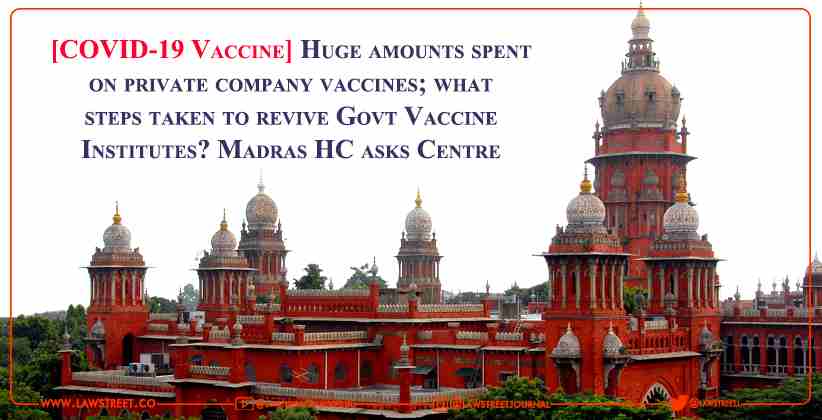 The Madras High Court on Friday (May 7, 2021) asked why the Central government is dependent solely on private manufacturers to procure COVID-19 vaccines in large quantities while government-owned facilities such as the Integrated Vaccine Complex at HLL Biotech Ltd (HBL), Chengalpattu, are idle.

A Veronica Mary filed a Public Interest Litigation (PIL) petition before the bench of Justices MS Ramesh and B Pugalendhi.

The Madras High Court on Friday asked why the Central government is dependent solely on private manufacturers to procure COVID-19 vaccines in large quantities when government-owned facilities, such as the Integrated Vaccine Complex at HLL Biotech Ltd (HBL), Chengalpattu, are idle.

A Public Interest Litigation (PIL) petition filed by one A Veronica Mary was heard by a bench of Justices MS Ramesh and B Pugalendhi.

Regardless, one thing is clear: "At this time, the Government is procuring COVID vaccines, namely COVAXIN from Bharat Biotech and COVISHIELD from Serum Institute of India, which are private companies, implying that the Government's vaccine manufacturing institutes are not being used at all."

The Bench went on to say that, considering the size of the Indian population and the current sales rates of the two vaccines available in India - COVISHIELD and COVAXIN - "the Government has to invest huge amounts of money."

Concerns have been expressed about government-owned vaccine units not being used during the pandemic.

"This Court is not finding fault with the Government's action in procuring the vaccines from private enterprises or the deliberations with regard to the fixation of price, but, our anguish is that when the Government itself is having the vaccines manufacturing institutes, such institutes [dying public sector undertakings] may be revived and they may be put into effective use, so that the Government may be in a position to cover all the citizens, besides will not be in a position to bargain with the private institutes at this difficult time," the Court said.

The petitioner told the Court that the Integrated Vaccine Complex at HBL, Chengalpattu, was built in 2012 and had a capacity of producing 585 million doses per year, in accordance with international standards.

However, the court was told that this facility has yet to be used to meet the needs of the COVID-19 pandemic. According to the petitioner, a Right to Information (RTI) request revealed that vaccine development at the complex is being considered by the Union Health Ministry. The Court was told, however, that no manufacturing operations have yet begun.

"Literally speaking, a complex, which is declared as Project of National Importance and established with an estimated cost of around Rs.594/- Crores, is lying idle for the past nine years, since 2012," the Court noted. Apart from seeking the revival of the Chengalpattu vaccine manufacturing unit for the production of COVID-19 vaccines, the petitioner also urged the Court for directions to commence oxygen production at the oxygen plants of the Bharat Heavy Electricals Ltd. (BHEL), Trichy.

Tiruchi Siva, a Member of Parliament, wrote a letter to the Union Minister of Heavy Industries and Public Enterprises Room on April 26, 2021, the Court was told.

The Bench proceeded to issue notice returnable by May 19, while posing the following queries for the concerned authorities to answer:

In response, Additional Solicitor General R Sankaranarayanan orally stated that tenders for the project had been floated and that a decision could be made by the end of the week.