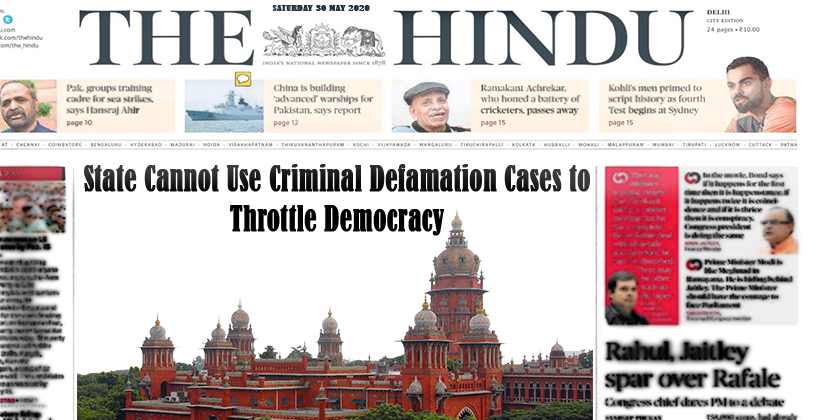 A Single Bench of Justice Abdul Quddhose of the Madras High Court on May 21, 2020, while delivering judgment in the matter of N. Ram, Editor-in-Chief, Printer & Publisher “The Hindu” and Ors. v. Union of Indian and Anr. emphasized that criminal defamation proceedings cannot be misused by the State to throttle democracy or settle political scores with adversaries.

Among the batch writ petitions filed under Art. 226 of the Constitution, several newspapers had challenged the launching of prosecution of Criminal defamation against them under Section 499 (defines Defamation) of Indian Penal Code, 1860 by the State Government through the Public Prosecutor under Section 199(2) of Criminal Procedure Code, 1973 (Cr.P.C.).

Several issues like ‘what is meant by Criminal defamation against the State?’ and ‘what are the statutory criteria required for launching prosecution for criminal defamation under Section 199(2) Cr.P.C through a Public Prosecutor (PP)?’ were raised by these petitioners, which had larger ramifications on freedom of speech under Art. 19(1)(a).

In addition to “the Hindu”, other media-houses who had petitioned were “Nakheeran”, “Times of India”, “Dinamalar”, “Tamil Muras”, “Murasoli” and “Dinakaran”.

S. 199(2) of Cr.P.C allows the PP to launch a prosecution of defamation when the person defamed is the President, the Vice-President, the Governor, a Minister of a Union or a State or any other public servant employed with Union or State and imputation is in respect of his conduct in the discharge of his public functions.

Submissions of the Petitioners:

As many petitioners of the case were represented by several advocates, their common submission was that freedom of the press is the foundation of a democratic society and airing of a different viewpoint or criticism would not amount to Defamation and alleged defaming news items had been published in pursuit of truth and for the public good and no malice was involved.

They also contended that the concept of defamation concerning those holding public office or the Government is qualitatively different from defamation in respect of private individuals as in a free democratic society, those who hold public office in Government and are responsible for public administration should be open to criticism and citizens have a legitimate

and substantial interest/right to know the conduct of public officials as they have an influential role in society.

They further remarked that the complaints were an attempt to interfere with the fundamental right of free speech and expression guaranteed under Article 19(1)(a) read with Article 21 of the Constitution of India. They had further submitted that the State while granting leave for prosecution had not applied its mind.

Submission of the Government:

The Government had contended that the Orders (granting leave of prosecution for defamation) challenged in the Writ Petitions exhibited application of mind and reasons for coming to the conclusion that the statements in the article/publication has reasonable nexus with the discharge of official duties and aimed with defaming the name, fame of the constitutional functionaries.

The Conclusion of the Court:

The Court studied wide area of authorities ranging from Chapter XXI of the Indian Penal Code which deals with Criminal defamation and comprises of sections 499 to 502, decisions of the Hon’ble Supreme Court and other High courts on the substantive and procedural aspects of criminal defamation law, Criminal defamation law in other major Democracies as well as the UN Convention on Tolerance, 1995 and Opinion of jurists on Freedom of speech and expression under Article 19 (1) of the Constitution of India, before arriving at its decision.

The Supreme Court in the case of Subramanian Swamy Vs Union of India reported in (2016) 7 SCC 221 had held that Public function stands on a different footing than the private activities of a public servant. The provision of S. 199(2) gives protection for their official acts. There cannot be defamatory attacks on them because of the discharge of their due functions. In that sense, they constitute a different class.

It must be noted here that under section 199(2) Cr.P.C., the prosecution is launched through a public prosecutor and hence, it has to be examined and analyzed as to whether the criminal defamation has been committed against the constitutional functionary/public servant in respect of his conduct in the discharge of his public functions or in addition to that requirement whether the State as a whole has been defamed. The State, therefore, would be rightly interested in pursuing the prosecution; hence the special provision and the special procedure under S. 199(2) Cr.P.C. has been designed.

According to the Court, in such cases under the statutory scheme under the Criminal Procedure Code, the prosecutor plays an important role as he is supposed to be an independent person and apply his mind to the materials placed before him. The Court also remarked that the prosecutor cannot merely act as a post office between the State and the Court.

Regarding the role of a prosecutor, the Supreme Court in the case of Bairam Muralidhar vs the State of Andhra Pradesh reported in (2014)10 SCC 380 had held he is required to act in good faith, peruse the materials on record and form an independent opinion that the withdrawal of the case would subserve the public interest at large. An order of the Government on the public prosecutor in this regard is not binding. He cannot remain oblivious to his lawful obligations under the Code. He is required to constantly remember his duty to the Court as well as his duty to the collective.

Interestingly the Court also took into consideration the lecture delivered by Justice Deepak Gupta (retired) on the law of sedition in India and freedom of expression on September 07, 2019, where he had remarked that “right to dissent is one of the most important rights guaranteed by our Constitution.

As long as a person does not break the law or encourage strife, he has a right to differ from every other citizen and those in power and propagate what he believes is his belief”. The Court also cited a lecture delivered by Justice D. Y Chandrachud at the Justice P.D.Desai Memorial Lecture recently, where he had emphasized that “an essential aspect of any successful democracy is its commitment to the protection of deliberative dialogue.”

The definition of Defamation in S. 499 of the IPC contains many exceptions and it is non-cognizable offense, hence the Court concluded that the intention of the legislature is to restrict the usage of the criminal defamation law.

The Court explained the difference between S. 199(2) and S. 199(6) and again reiterated that only in cases where the State has been defamed and a public servant/constitutional functionary has also been defamed while discharging his public functions, S. 199(2) gets attracted and only then, a public prosecutor can launch a prosecution after obtaining prior sanction from the competent authority under S. 199(4) Cr.P.C. In all other cases where the ingredients of defamation have been made out, but the State has not been defamed, it will fall only under section 199(6) Cr.P.C. and can be filed only before the Magistrate unlike S. 199(2) while will directly be put before Sessions Court.

On the duty of Sessions Court, the High Court held that,

Talking on its own power, the Court held that, the High Court has got the constitutional power to quash Government Orders sanctioning prosecution under section 199(2) Cr.P.C., if the competent authority, without any material as to how the State is defamed, has sanctioned prosecution.

In this regard, the Court analyzed each prosecution which was initiated against the petitioners and held that the core ingredient required for prosecution through a public prosecutor under section 199(2) Cr.P.C. namely “Defamation of the State” was missing in each case.

The Court at the end held that,

“all the writ petitions deserve to be allowed as none of the prosecutions fall under the category of Section 199(2) Cr.P.C though some as indicated in this common order may fall under Section 199(6) Cr.P.C.”