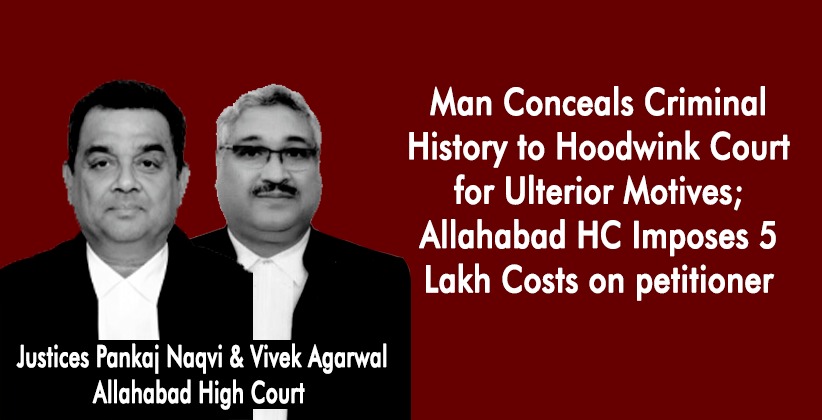 Judiciary Dec 17, 2020 Gautami Chakravarty ( Editor: Ekta Joshi ) 7 Shares
7 Shares
The Allahabad High Court recently imposed a cost of Rs. Five Lakhs on a petitioner who made an incorrect statement in the Writ Petition that merely on the basis of a single case, Gangsters Act, 1986 had been invoked against him.

The Bench of Justice Pankaj Naqvi and Justice Vivek Agarwal was hearing a Writ Petition praying before the Court that impugned orders of the District Magistrate, Mau be quashed.

Contentions raised before the Court-

Petitioner's contention was that vide order dated 21.10.2020, the District Magistrate, Mau had directed for attachment of properties of the petitioner exercising his authority under Section 14 of the UP Gangsters and Anti-Social Activities Act, 1986 whereas vide order dated 29.10.2020, the District Magistrate by revising the order, also attached 300 tons of coal illegally stored in such properties. The Counsel for the petitioner submitted that the petitioner was victimized merely on the basis of suspicion.

He further submitted that as per gang chart appended along with the FIR, registering Case Crime No. 47 of 2010 under Section 3 of the Gangsters Act at Police Station Kotwali, District Mau, there is mention of a solitary case against petitioner. It was submitted that on the basis of the solitary case, case against him was registered under the Gangsters Act, therefore, it was argued that the petitioner was falsely implicated with oblique motive. On the other hand, the AGA submitted that petitioner's contention was factually incorrect and the petitioner cleverly suppressed material information from the main body of the writ petition.
AGA submitted that there is long history of the petitioner's involvement in criminal cases and that he is habitually involved in several criminal matters and these materials have been taken into consideration by the District Magistrate. It was contended that arbitrarily petitioner mentioned that he was involved only in one case namely Case Crime No. 1866 of 2009 which is factually incorrect and that amounts to suppression of material information from this Court.

The Court was 'amazed' that petitioner did not mention the fact that he had history of other criminal cases to his credit. We are thus of the considered view that the omission was intentional and deliberate with a view to hoodwink the court for ulterior motives which cannot go unpunished. It is apparent that petitioner is guilty of suppressing material facts. It is also apparent that petitioner has made an incorrect statement in the writ petition that merely on the basis of solitary case, the Gangsters Act, 1986 has been invoked against him. In fact, petitioner's case is squarely covered by Clause i, ii and XXV of Section 2 of the Gangsters Act, 1986 and therefore there is no ground to quash the impugned orders. Further, for misrepresenting the facts before the Court, the Court was of the view that heavy cost was needed to be imposed on the petitioner as «he did not approach the court with clean hands to seek equitable relief in the form of issuance of either writ of certiorari or writ of mandamus.
Therefore, the Court dismissed the writ petition while imposing a cost of Rs. 5,00,000/- on the petitioner.
The cost has been directed to be deposited in the High Court Legal Services Authority within 30 days from the date of the Order.
Case Title - Umesh Singh v. State of U.P. and another.    [READ ORDER]