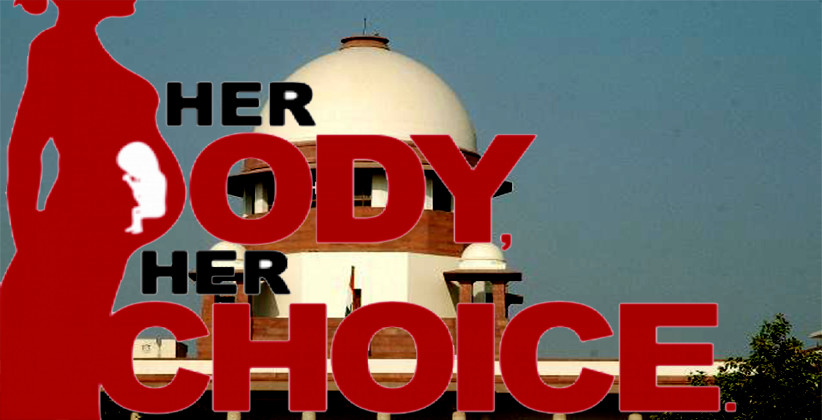 The petition has been filed under Article 32 of the Constitution of India jointly by Swati Agarwal, Garima Sekseria and Prachi Vats challenging the validity of Sections 3(2), 3(4) and 5 of the Medical Termination of Pregnancy Act, 1971, on the basis that it violates Articles 14 and 21 of the Constitution.

As per Section 3, pregnancy up to twelve weeks may be terminated by a registered medical practitioner, if he/she forms an opinion in good faith that the continuance of the pregnancy would involve a risk to the life of the pregnant woman or of grave injury to her physical or mental health. In case of pregnancy exceeding 12 weeks but not exceeding 20 weeks the said opinion will have to be formed by two registered medical practitioners.

Section 5, among other things, permits termination of pregnancy exceeding twenty weeks only in cases of immediate risk to life of the woman.

The petitioners challenge these provisions by stating that "The right to exercise reproductive choice i.e. the right to choose whether to conceive and carry pregnancy to its full term or to terminate is it at the core of one's privacy, dignity, personal autonomy, bodily integrity, self determination and right to health recognized by Article 21 of the Constitution.”

With regard to Section 3(2)(a), the petitioners states that “the restriction puts an undue burden on the exercise of free reproductive choice and make right to terminate pregnancy an exception which is otherwise recognized as an important facet of right to life, human dignity, autonomy and self determination.”

The petitioners submitted that abortion in the first trimester involves very less risks, and statutory restrictions during this period are totally uncalled for. Reference is made to the celebrated US Supreme Court decision Roe vs Wade in this regard. "It is submitted that at this stage of pregnancy there is no legitimate interest of the State involved for interfering in the right of reproductive choice of the woman and therefore there should not be any intervention by the State curtailing the right of the lady to terminate pregnancy. Only regulatory measures aimed at safe abortions can be made. The restriction imposed by the impugned provision does not have nexus with the object of the Act which is prevention of maternal mortalities and complications associated with unsafe abortion and is excessive and disproportionate and fails to meet the test laid down in KS Puttaswamy,” the petitioners state.

Further, as regards Section 3(2)(b), it is stated that restricting the permissible length of pregnancy to 20 weeks is excessive and harsh. With the advent of science and technology diagnosis of fetal abnormalities is possible at subsequent stages and with the advancement of science and technology it has become possible to terminate pregnancy even at later stages, contend the petitioners.

Coming down to the Explanation attached to Section 3(2)(b), the petitioners alleges that it results in hostile discrimination against single women.

The Explanation states that where any pregnancy occurs as a result of failure of any device or method used by any married woman or her husband for the purpose of limiting the number of children, the anguish caused by such unwanted pregnancy may be presumed to constitute a grave injury to the mental health of the pregnant woman.

This means that only married women are covered under the Explanation. The exclusion of unmarried women is challenged by stating, "The object is to enable a woman to terminate an unplanned and unwanted pregnancy since a pregnancy entails several physical, mental and socio-economic consequences. Keeping the object in view there is no rationale for not affording the same protection to an unmarried woman. On the contrary an unwanted and unplanned pregnancy will invariably in the case of an unmarried woman will ensue more grave consequences.”

In concern to Section 5, the petitioner states “Section 5 so far as it permits abortion after 20 weeks only on the ground of immediate necessity to save the life of the pregnant woman is violative of Articles 14 & 21.”

After West Bengal, GI Tag Granted To Odisha For Its Version Of Rasagola