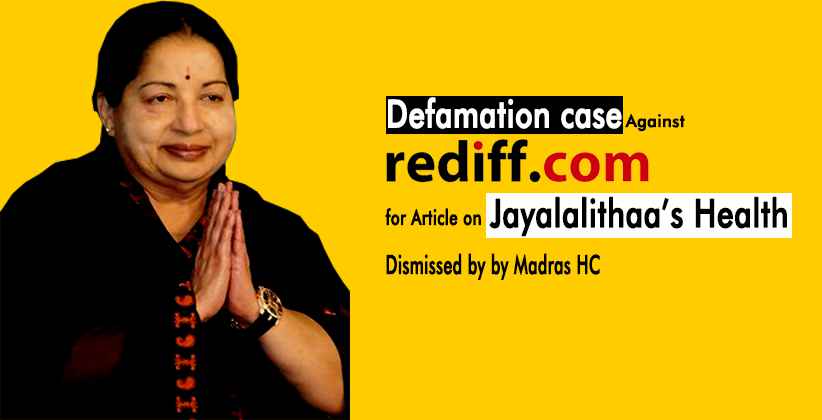 The defamation proceedings initiated by the State against the Chairman, Editor-in-Chief, Associate Editor and reporter of Rediff.com for a news article dated July 10th, 2015 in the media was accused that the media is not showing reporting properly about the then Chief Minister of State Jayalalithaa’ deteriorating health is been quashed by the single judge bench of Justice P. N. Prakash of Madras High Court, Justice said “ A genuine assessment of the state of affairs of the administration at a given point of time cannot amount to defamation “, he also added that the state is seeing the article as bits and pieces whereas it should be seen as a whole.

The court further said that “The press has a duty to keep public informed about the happenings in the administration of the State. If this freedom is stifled, rumors and gossips will masquerade as truth”. It also said that Article 19(1)(a) of the Constitution of India is pure, though it can be restricted on the grounds set under Article 19(2) of the Constitution of India. The bench also said that there has been no reference to any particular ailment of the Chief Minister.

The complaint filed by the government said that petitioners are liable to be punished under Section 499 r/w 500 of the Indian Penal Code, 1860, and alleged that due to the article published in the online website the Chief Minister was defamed with respect to the discharge of public function.

The Court further said that “The above article has been addressed to the Chennai press and a question has been posed to them, as to why they are not properly reporting about the health of the Chief Minister. The fact that the Chief Minister was not well, was so obvious when on May 23, 2015, twenty-eight Ministers took oath in two batches at a stretch, which was unprecedented. The article does not refer to any particular ailment of the Chief Minister or make any disparaging remark about her health.

The article states that the Chief Minister did not even attend the Iftar party in the first week of July and that she issued a written statement saying that she was unwell, and so, she is deputing Mr.O.Paneerselvam to attend the party In the complaint, except making general denial in paragraph no.6, there is no specific repudiation of these facts, because, none can hide a pumpkin in a morsel of food. The whole world saw the swearing-in ceremony of the ministers on 23rd May and the ceremony lasted for not more than 30 minutes”. It further added “In such view of the matter, this Court does not find the impugned article to be defamatory of the then Chief Minister Ms.J.Jayalalithaa in respect of her conduct in the discharge of her public functions warranting the prosecution of the petitioners for the offence under Section 499 r/w 500 IPC. As the result, these criminal original petitions are allowed and the prosecution against the petitioners in C.C.No.21 of 2015 pending on the file of the Principal District and Sessions Court, Chennai, is hereby quashed. Connected M.Ps. are closed”.