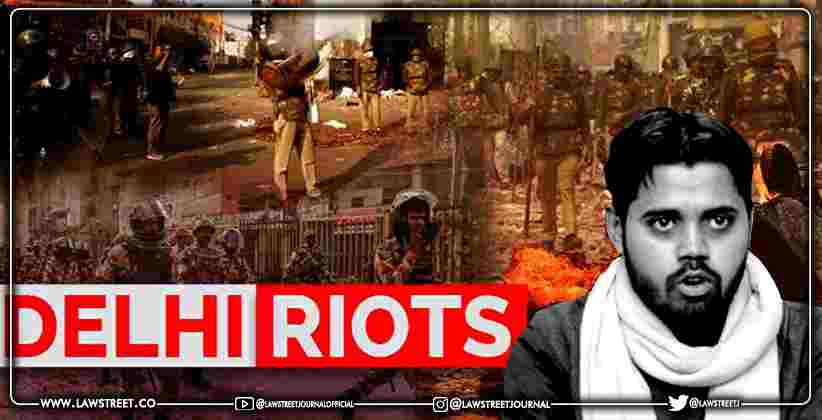 On June 23, 2021, a Delhi High Court accepted the bail bonds of Delhi Riots accused Asif Iqbal Tanha but directed a fresh verification of the new address at Delhi’s Jamia Nagar provided by him.

The order was passed by Additional Session Judge Amitabh Rawat after Special Public Prosecutor Amit Prasad took objection to the address stated by Tanha contending that the same was incorrect. He stated that the accused never resided at the given address. SPP also submitted that Tanha's permanent address of Jharkhand has been verified along with the status of both the sureties.

The counsel for Tanha responded by stating that he used to reside at the given address before his arrest and due to the arrest, the tenancy expired. This was also confirmed by Asif Iqbal who was present through a video conferencing link during the course of hearing.

The Court also inquired from the accused regarding his address before directing fresh verification.

On June, 15,2021 the Delhi High Court granted bail to Tanha and two other accused, Natasha Narwal and Devangana Kalita in the UAPA (The Unlawful Activities (Prevention) Act), case registered against them in connection with the Delhi riots conspiracy case.

The Delhi Police had filed a charge sheet against them claiming that the protest organized by them against the Citizenship Amendment Act from December 2019 was part of a "bigger conspiracy" behind the North East Delhi communal riots which occurred in February 2020.

In the three separate orders giving the bail applications of Tanha, Narwal, and Kalita, the High Court has conducted a factual examination of the allegations to discover if a prima facie case is made out against them for Section 43D (5) ( no person accused of an offence punishable under Chapters IV and VI of this Act shall, if in custody, be released on bail or on his own bond unless the Public Prosecutor has been given an opportunity of being heard on the application for such release) of The Unlawful Activities (Prevention) Act, 1967.

Therefore, the division bench stated that section 43D (5) of the UAPA was not attracted against the accused while granting bail and hence they were entitled to grant bail under the ordinary principles of the Code of Criminal Procedure.

“Since we are of the view that no offense under sections 15, 17, or 18 UAPA is made out against the appellant on a prima facie appreciation of the subject charge-sheet and the material collected and cited by the prosecution, the additional limitations and restrictions for grant of bail under section 43D (5) UAPA do not apply; and the court may therefore fall back upon the usual and ordinary considerations for bail under the Cr. P.C", the court stated.

However, the orders of granting bail to Natasha Narwal and Devangana Kalita were challenged by Delhi police in the Supreme Court. Replying to this appeal, the Supreme Court stated that the impugned judgment will not be considered as precedent until the matter is finally decided.

Further, the court stated that it was not interfering with the bail granted to the activists Devangana Kalita, Natasha Narwal, and Asif Iqbal Tanha at this stage.

The verification report is to be filed before the Court on the 15 July, the regular date of hearing for the Delhi riots case.